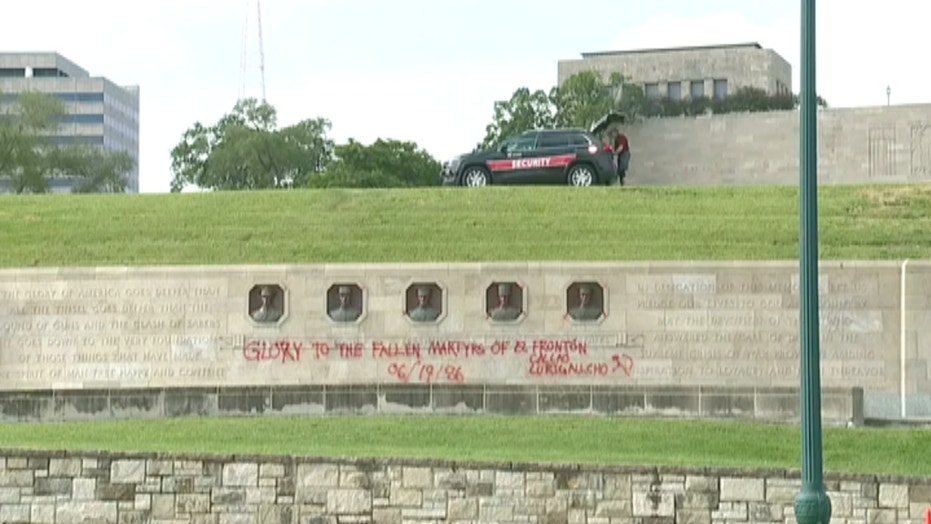 Police are searching for two vandals who defaced the World War I Liberty Memorial in Kansas City, Mo., on Tuesday using some red spray paint.

The spray-painted words on the museum's Dedication Wall read, "Glory to the fallen martyrs," making reference to prison massacres that occurred on June 18-19, 1986. In the deadly episode, riots broke out across San Pedro, Santa Mónica and El Frontón prisons in Lima and Callao. At least 224 people died as the military acted to tamp down the violence.

FOUR WW1 SHIPWRECKS ARE BEING SOLD ON EBAY FOR $1M

Vandals spray-painted "Glory to the fallen martyrs," on the World War I Memorial

In the vandalism case, police responded to calls after midnight. But the vandals, thought to be two males, had already fled the scene.

"We're saddened by the act of vandalism this morning on the memorial, built to honor our men and women who served," the National WWI Museum tweeted after the incident.

Several other instances of vandalism were documented across Kansas City, including at Calvary Temple Church on Saint John Avenue, and under the Gladstone bridge near Concourse Park, where the same words were painted in red.