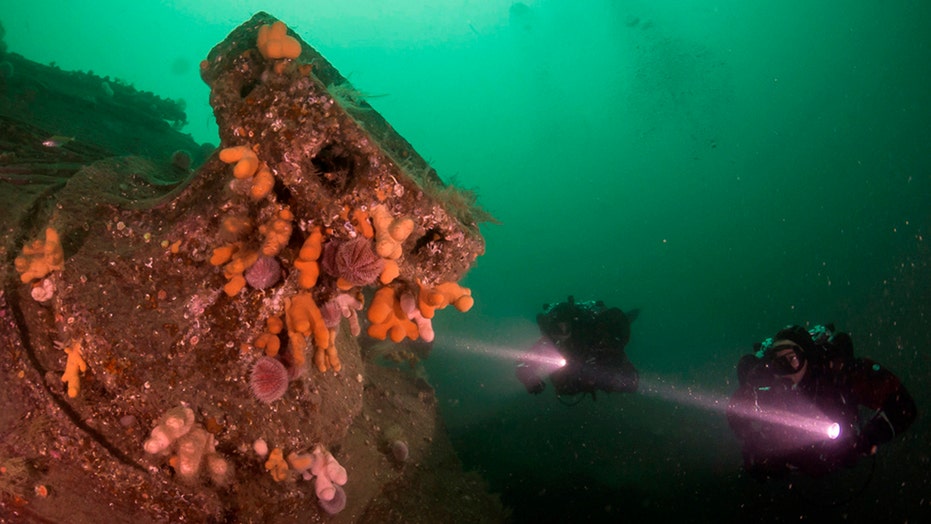 And you thought your baseball cards were worth putting on eBay.

Four German warships that were used and sank during World War I are being put up for sale on the auction website and could fetch $1 million or more.

The current owner, 70-year-old Thomas Clark, bought the shipwrecks in 1981 for an undisclosed sum and has decided he's had enough.

A winch on the SMS Karlsruhe. 2012. The wrecks of four WWI German battleships scuttled on the Orkney seabed - dreadnoughts Kronprinz Wilhelm, Konig, Markgraf, and the cruiser Karlsruhe - have been put up for sale on eBay. (Credit: SWNS)

"It has been an absolute pleasure to own and dive on these iconic vessels and I regret I have not managed to do more with them during the period of my ownership," Clark said of the wrecks that have been lying on the Orkney seabed for nearly 100 years, in comments obtained by SWNS. "I look forward to passing them on to the new owner and hope they get the opportunity to realize their aspirations for the vessels."

The eBay advert for the sale of the SMS Karlsruhe Scapa Flow for £60,000. (Credit: SWNS, eBay)

The eBay advert for the sale of the SMS Kronprinz Wilhelm Scapa Flow for £250,000. (Credit: SWNS, eBay)

According to the eBay ads, if someone bought all four shipwrecks, they could "have a sizeable naval fleet amongst the largest in the world."

The ships were part of the German High Seas Fleet and took part in the Battle of Jutland, the largest naval battle of the conflict.

Eventually, they were interned by the British Royal Navy in Scapa Flow in 1919 where they were disarmed. Before the Treaty of Versailles was signed, the commander of the interned fleet, Rear Admiral Ludwig von Reuter, ordered the fleet to be scuttled to prevent the allied forces from seizing them and they have sat on the ocean floor ever since.

In total, 52 of the 74 vessels seized wound up sinking. Many of the wrecks were eventually salvaged and towed away, but the aforementioned wrecks have sat on the ocean floor, where they are protected as official monuments.

SMS Kalrushe. The wrecks of four First World War battleships that have been lying on the seabed in Orkney for a century have been put up for sale on eBay. Dreadnoughts Kronprinz Wilhelm, Konig and Markgraf and the cruiser Karlsruhe were part of the German High Seas Fleet, which was famously scuttled at Scapa Flow while interned there as the Treaty of Versailles was being finalized. The scuttling was carried out on June 21, 1919 on the orders of Admiral Ludwig von Reuter to prevent allied forces seizing the ships after Germany's defeat in the conflict. British guard boats were able to beach a number of the ships, but 52 of the 74 interned vessels sank. (Credit: SWNS)

Clark bought the SMS Markgraf and planned to salvage it, but the fact it's protected as a monument prevented him from doing this. It, and the other wrecks have become popular for recreational divers, but they are not allowed to touch or go with a meter of the wrecks.

The new owner would have the right to dive on the ship and be allowed to enter and touch them, while also being able to reclaim items from them. However, they would need permission from Historic Environment Scotland.

It's also unlikely that any kind of commercial salvage would be allowed and any sale would need the consent of the U.K.'s Ministry of Defense before any sale is finalized.