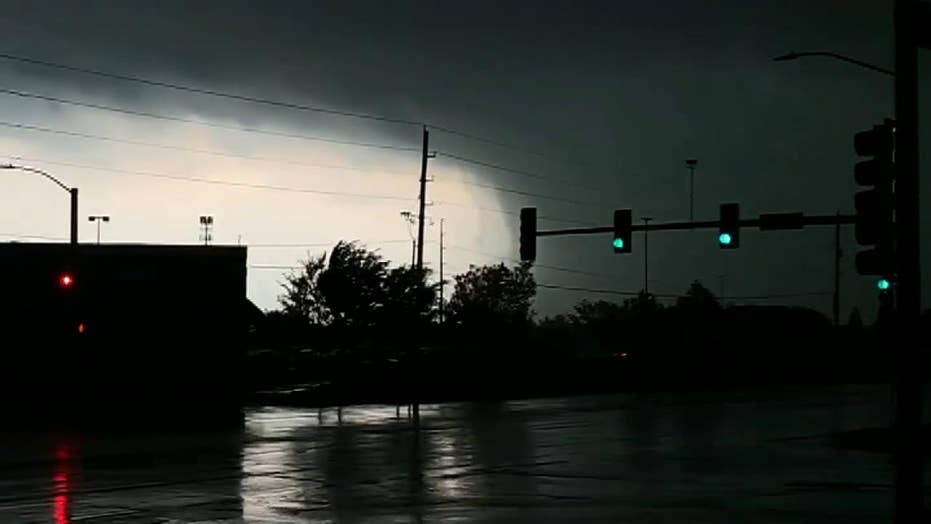 Meteorologists report the tornado was on the ground for about an hour, leaving a 25 mile wide path of destruction in its wake.

President Trump Tuesday evening approved a disaster declaration in Kansas at the request of the governor, making federal aid available to the state after a tornado touched down in Kansas City.

The National Weather Service (NWS) declared a tornado emergency for the area as the storm was approaching Interstate 70 near the Kansas Speedway, which hosts NASCAR races. Douglas County Sheriff's Department spokeswoman Jenn Hethcoat told the Lawrence Journal-World that 12 people were taken to the hospital with injuries -- including one with serious injuries -- suffered from the storm. Several homes throughout the county sustained damage, the department said.

Officials in Kansas City said they received a report of a tornado just after 6 p.m. that was on a path toward Lawrence, a city of about 100,000 residents and home to the University of Kansas' main campus.

"The heart of KC is in this tornado warning! This is a dangerous situation. TAKE SHELTER NOW!" the NWS' Kansas City office tweeted.

In Lawrence, trees were toppled and power lines were brought down, but most of the damage to structures seemed to occur outside the city limits, the Lawrence Police Department said.

Major damage to homes was reported in Linwood, a 40-minute drive southwest of the city. Police blocked some roads around the city and the smell of gasoline soaked the air, the Kansas City Star reported.

It was not immediately clear if anyone was hurt.

The NWS later expanded the tornado warning to include all of the Kansas City area, including the Missouri side of the city. The Kansas City International Airport moved passengers and workers into garage parking tunnels, the airport tweeted. By 7:45 p.m., everyone was being brought up from shelter.

Joe Armison looking over his destroyed barn after a tornado struck the outskirts of Eudora, Kan., on Tuesday. (AP Photo/Colin E. Braley)

The airfield was closed and flight delayed as crews were cleaning storm debris.

Tornado emergencies also were issued for parts of Wyandotte, Johnson and Leavenworth counties until 7:15 p.m., the National Weather Service said. Another tornado was spotted near Bonner Springs, according to the paper.

The Kansas City tornado warning was lifted just after 7:30 p.m. The NWS warned people to "don't let your guard down! Hail and strong winds are still possible, so stay inside and be prepared to take shelter if necessary."

A rapid-fire line of apparent tornadoes tore across Indiana and Ohio overnight, packed so closely together that one crossed the path carved by another.;

On Twitter, users posted photos and videos of the storm.

Tornadoes have been reported across eight states in recent days. Dozens of tornadoes have slammed the region in all, resulting in flooding and some deaths.