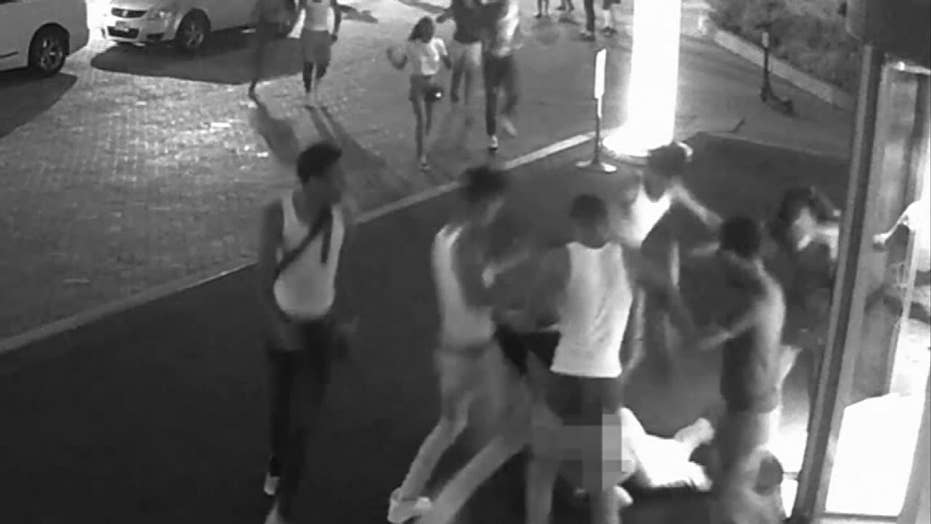 Washington D.C. police were searching Thursday for a group of 14 juveniles caught on surveillance video beating, stomping and spitting on a man outside a hotel earlier this month.

The Washington Metropolitan Police Department said the incident happened July 14 outside the Washington Hilton hotel on Connecticut Avenue at around 1 a.m. Surveillance video shows two men attempt to walk into the hotel when the group surrounds them and begins throwing punches and kicks.

One man is knocked to the ground while the other escapes into the hotel. The group continues to stomp and punch the man as he lies on the ground. The juveniles eventually disperse, leaving the man on the sidewalk.

Some of the juveniles could be as young as 13 years old, according to a police report obtained by FOX 5 DC.

The man who escaped into the hotel told police there was an exchange of words before the attack, with one of the suspects yelling, “That’s him,” while pointing at the man walking with him, according to the station.

The man who was knocked to the ground suffered injuries to his head and left eye socket, FOX 5 reported. The other man suffered a swollen left eye. Both were treated at a local hospital.

Police are asking anyone with information on the identities of the juvenile suspects to contact them at (202) 727-9099.

The incident was another in a spate of recent assaults caught on video involving teenagers.

In California, a group of four to five teens beat a couple who were taking out the trash just before midnight Sunday. Meanwhile, Chicago police said Thursday that they had arrested three juvenile girls, aged 13, 14 and 15, accused of assaulting a 15-year-old special needs girl.