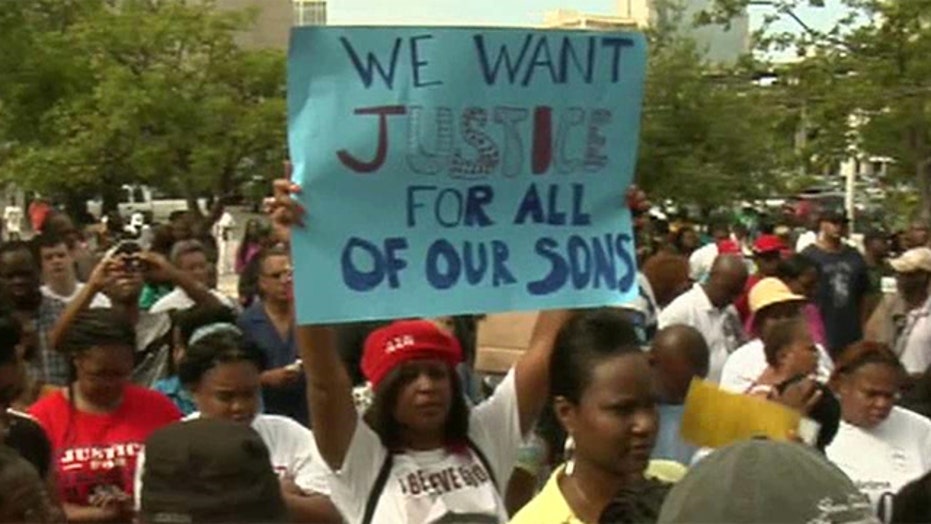 Thousands gather to peacefully protest outcome of the Zimmerman trial

ATLANTA – One week after a jury found George Zimmerman not guilty in the death of unarmed teen Trayvon Martin, people gathered nationwide for rallies to press for federal civil rights charges against the former neighborhood watch leader and call for changes to the nation's self-defense laws.

The Florida case has become a flashpoint in separate but converging national debates over self-defense, guns, and race relations. Zimmerman, who successfully claimed that he was protecting himself when he shot Martin, identifies himself as Hispanic. Martin was black.

For some attendees, particularly those who are black, the rallies seemed as much about those larger issues as about the verdict.

"It's personal," said Cincinnati resident Chris Donegan, whose 11-year-old son wore a hoodie to the rally, as Martin did the night he died. "Anybody who is black with kids, Trayvon Martin became our son."

The Rev. Al Sharpton's National Action Network organized the "Justice for Trayvon" rallies and vigils outside federal buildings in at least 101 cities: from New York and Los Angeles to Wichita, Kan., and Atlanta, where people stood in the rain at the bases of two federal buildings, with traffic blocked on surrounding downtown streets.

And plenty of participants carried signs: "Who's next?"  "I am Trayvon Martin." "Enough Is Enough."

Most rallies began at noon. In New York, hundreds of people -- including Martin's mother, Sybrina Fulton, and music superstars Jay-Z and Beyonce -- gathered in the heat.

Fulton told the crowd she was determined to fight for societal and legal changes needed to ensure that black youths are no longer viewed with suspicion because of their skin color.

"I promise you I'm going to work for your children as well," she told the crowd.

At a morning appearance at Sharpton's headquarters in Harlem, she implored people to understand that the tragedy involved more than Martin alone. "Today it was my son. Tomorrow it might be yours," she said.

In Atlanta, speakers noted that the rally occurred in the shadows of federal buildings named for two figures who had vastly differing views on civil rights and racial equality: Richard B. Russell was a Georgia governor and U.S. senator elected in the Jim Crow South; Martin Luther King Jr. is the face of African-Americans' civil rights movement.

"What's so frightening about a black man in a hood?" said the Rev. Raphael Warnock, who now occupies the pulpit at King's Ebenezer Baptist Church.

"History would suggest that we have plenty of data to be worried when we see other folk moving through our neighborhoods in hoods. Some of them have on pinstripe suits -- but in their hearts, they're wearing a hood."

In addition to pushing the Justice Department to investigate civil rights charges against Zimmerman, Sharpton told supporters In New York that he wants to see a rollback of "stand your ground" self-defense laws.

"We are trying to change laws so that this never, ever happens again," Sharpton said.

"Stand your ground" laws are on the books in more than 20 states, and they go beyond many older, traditional self-defense statutes. In general, the newer laws eliminate a person's duty to retreat, if possible, in the face of a serious physical threat.

Zimmerman didn't invoke "stand your ground," relying instead on a traditional self-defense argument, but the judge included a provision of the law in the jurors' instructions, allowing them to consider it as a legitimate defense.

Neither was race discussed in front of the jury. But the two topics have dominated public discourse about the case, and came up throughout Saturday's rallies.

In Indianapolis, the Rev. Jeffrey Johnson told roughly 200 attendees that Saturday's nationwide rallies were about making life safer for young black men, who he said are still endangered by racial profiling.

Johnson compared Zimmerman's acquittal to that of four white officers in the beating of black motorist Rodney King in 1992.

"The verdict freed George Zimmerman, but it condemned America more," said Johnson, pastor of the Eastern Star Church in Indianapolis and a member of the board of directors of the National Action Network.

In Miami, Tracy Martin spoke about his son.

"This could be any one of our children," he said. "Our mission now is to make sure that this doesn't happen to your child."

He recalled a promise he made to his son as he lay in his casket. "I will continue to fight for Trayvon until the day I die," he said.

Shantescia Hill held a sign in Miami that read: "Every person deserves a safe walk home." The 31-year-old mother, who is black, said, "I'm here because our children can't even walk on the streets without fearing for their lives."

Speaking at the White House on Friday, Obama said it's a reality for black men in American to "be followed in a department store" while shopping or to walk down the street and "hear the car doors lock." The nation's first black president said he had both experiences before he rose to social and political prominence.

The California native said he's been stopped multiple times by police and handcuffed "because I fit the description of someone they were looking for," though he noted charges were never filed against him.

"You can be the greatest black guy around, but you can't get away from it," he said. "You're not equal."

Attorney General Eric Holder announced this week that his department would investigate whether Zimmerman could be charged under federal civil rights laws. Such a case would require evidence that Zimmerman harbored racial animosity against Martin.

Most legal experts say that would be a difficult charge to prove. Zimmerman's lawyers have said their client wasn't driven by race, but by a desire to protect his neighborhood.

Holder said the shooting demonstrates the need to re-examine "stand your ground" laws.

Despite the pledges from politicians and civil rights groups, people at some rallies said they had little hope of seeing self-defense laws rolled back significantly.

Kevin Parker, a 50-year-old from Stone Mountain, Ga., noted the conservative influence in his state, where gun-friendly Republicans control both legislative chambers and hold all statewide offices.

"Being that this is a red state, I just don't see that happening," he said.