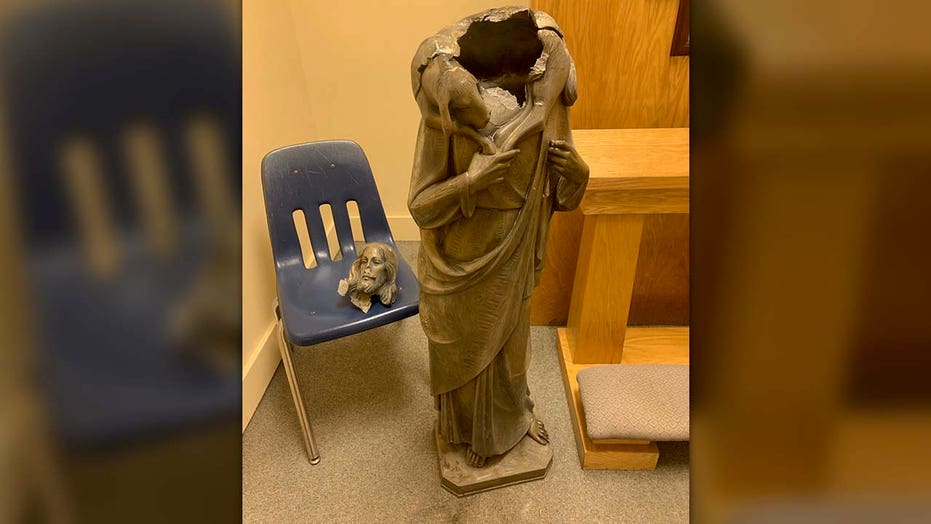 A statue of Jesus Christ was decapitated and knocked off a pedestal at a Catholic church in Florida, another in a string of similar incidents nationwide.

"This incident has saddened the parish community," Good Shepherd said in a statement. "It is too soon to arrive to any conclusion, but we have seen other churches vandalized around the country.  We totally 'condemn' this action. We invite our community to pray for peace."

A statue of Jesus Christ at the Good Shepherd Catholic Church in Southwest Miami-Dade was found decapitated and knocked off a pedestal early Wednesday morning. (Archdiocese of Miami)

The church has hired an overnight security guard.

"Archbishop Thomas Wenski is requesting this investigation be considered a hate crime," Mary Ross Agosta, director of communications for the Archdiocese of Miami told Fox News. "The statue, located outside the church, was on private and sacred property."

In a separate incident, a Catholic congregation in Ocala, several hours north of Miami, was targeted Saturday morning while preparing for Mass. Steven Anthony Shields, 24, is accused of slamming his vehicle into the church before setting it on fire. He was arrested and faces several charges, including attempted murder. Police said Shields told them he was on a mission and was opposed to the Catholic Church.

In another act of violence, the pastor of St. Stephen Catholic Church in Chattanooga, Tenn., found a statue of Mary decapitated on Saturday and they have not located the statue's head, Catholic News Agency reports.

"We don't know if this was the targeted desecration of a sacred statue and our Catholic faith, or some kind of misguided prank, but it hurts," Jim Wogan, director of communications for the Diocese of Knoxville, said in a statement. "For whatever reason, we are living in a very chaotic time, and anger seems to be the default setting for people."

Rep. Chuck Fleischmann, R-Tenn., called it a "disturbing attack on Catholicism and religion" in a tweet Wednesday: "I hope that the perpetrators will be brought to justice, but I also pray that they will find their way to God as well."

Statues of the Virgin Mary also were vandalized in Boston and New York City over the weekend.

A 249-year-old Catholic church in the Archdiocese of Los Angeles caught fire Saturday morning. Capt. Antonio Negrete of the San Gabriel Fire Department told the local Fox 11 news outlet the recent destruction of monuments to Junipero Serra, the founder of the California mission system – whom Indigenous activists view as a symbol of oppression – will be a factor in the investigation.

Following George Floyd's police-related death in May, Black Lives Matter leaders and protesters called for the toppling of statues, from Confederate symbols to former U.S. presidents and abolitionists. Activist Shaun King called for all images depicting Jesus as a "White European" and his mother to be torn down because they're forms of "White supremacy" and "racist propaganda."

Meanwhile, people on social media point out the lack of mainstream coverage of the recent anti-Catholic incidents.

"Churches are being burned to the ground. What?," Mike Cernovich, a controversial right-leaning author, said in a video on Twitter. "Why is this not the biggest story of the day?"

Sean Feucht, a California worship leader and pastor, commenting on the incidents asked, "Where's the outrage?"