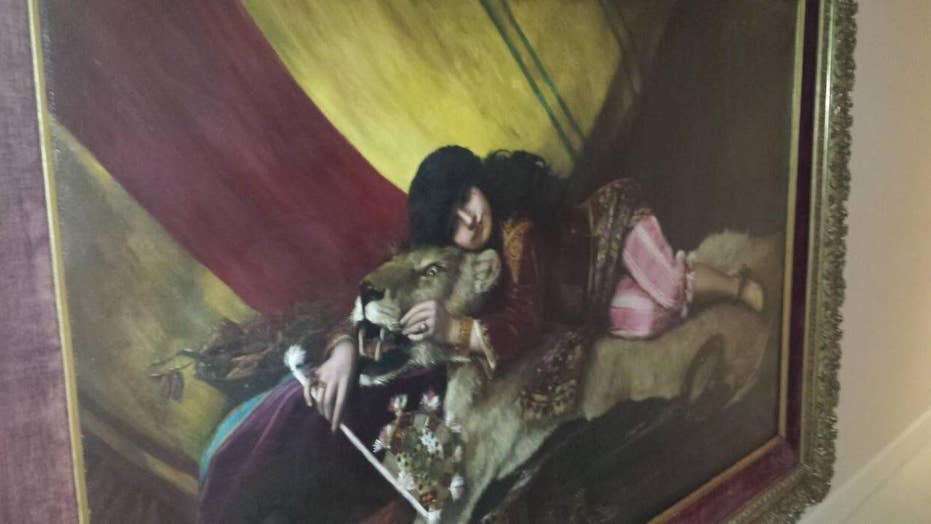 Jeffrey Epstein had painting of girl lying with 'big cat'

Jeffrey Epstein had a painting of a girl of indeterminate age lying with a 'big cat' at his New Mexico home in the latest odd revelation of art.

Odd and often creepy details continue to surface in the aftermath of accused sex trafficker Jeffrey Epstein's suicide, giving a glimpse of the twisted extravagance that was a staple of his life — right down to the art he chose to display on his walls.

The latest revelation involves a massive painting showing a young woman of indeterminate age wearing a wedding ring and cuddled up beside a roaring big cat. A photo of the artwork was taken by a contractor who worked at Epstein's sprawling New Mexico home in 2013 and provided exclusively to Fox News. The contractor requested anonymity in order to speak freely. (The contractor said the animal was a tiger, although it didn’t appear to have stripes.)

“It was huge – at least 5-by-5, 6-by-6 – in the main house, at the bottom of the stairs in the basement near the laundry,” the contractor told Fox News of the bizarre painting at Epstein's Zorro Ranch in Stanley, N.M. “We would talk about how creepy it was, this strange painting with nothing else around it. From the minute you got there, you felt the uneasy vibe.”

The big cat canvas is only the most recent eyebrow-raising item to emerge from the disgraced financier's art collection. Other Epstein homes were said to be adorned with everything from a massive mural of a prison yard – with Epstein at the center – to a framed prosthetic eyeballs, human dolls hanging from chandeliers, human-sized chessboards with scantily clad figurines like something out of a tawdry version of "Alice In Wonderland" and photos of naked females.

According to the former Epstein contract employee, all staff on the convicted sex offender's property were subject to security checks and constant monitoring as soon as they stepped onto the sprawling property – which even had its own “Western town.”

PEDOPHILES IN PRISON: THE HELL THAT WOULD HAVE AWAITED EPSTEIN IF HE'D STAYED BEHIND BARS

“We had to be escorted in on a truck with other employees, and, once inside, we had to put little hospital booties over our feet -- and it was mandated that we are escorted everywhere we went and use side entrances,” the contractor said. “About every 3 minutes someone would come down to keep an eye on us while we were working.”

Zorro Ranch, one of the properties owned by financier Jeffrey Epstein, is seen in an aerial view near Stanley, N.M., U.S., July 15, 2019. REUTERS/Drone Base/File Photo

The former worker also described being alerted whenever a “special guest” was on the premises -- which sent the already heavily-secured compound into overdrive.

But of everywhere on the 10,000-acre residence – which was dotted with pools, a firehouse, log cabins, guest homes and its own airport hangar and runway – what was the most out-of-bounds? The several-story garage filled with Epstein’s high-end car collection, the worker noted.

Epstein committed suicide early on Aug. 10 while behind bars at the Metropolitan Correctional Center, creating instant controversy as to how such a high-profile prisoner was able to kill himself -- especially in the wake of an alleged suicide attempt just a little more than two weeks before.

The convicted sex offender, who entered a controversial plea deal in Florida in 2008 over charges of assault on a minor, was again arrested by the FBI on July 6 in New York – this time accused of operating an underage child sex trafficking ring, remanded to the MCC and denied bail.

According to a New York Times report in the wake of his death, Epstein intended to use the $17 million New Mexico property to impregnate scores of females, in a quest to “seed the human race with his DNA.” While registries have been set up to try and determine if he did indeed procreate, no evidence of any Epstein offspring has been discovered.

Nonetheless, Epstein started spending more and more time at the stately New Mexico abode after his 2008 conviction -- perhaps an easy choice given that it was the only state where he was not required to register as a sex offender.

Zorro Ranch is the only U.S. property belonging to the late pedophile that hasn’t been raided, CBS News reported Thursday.