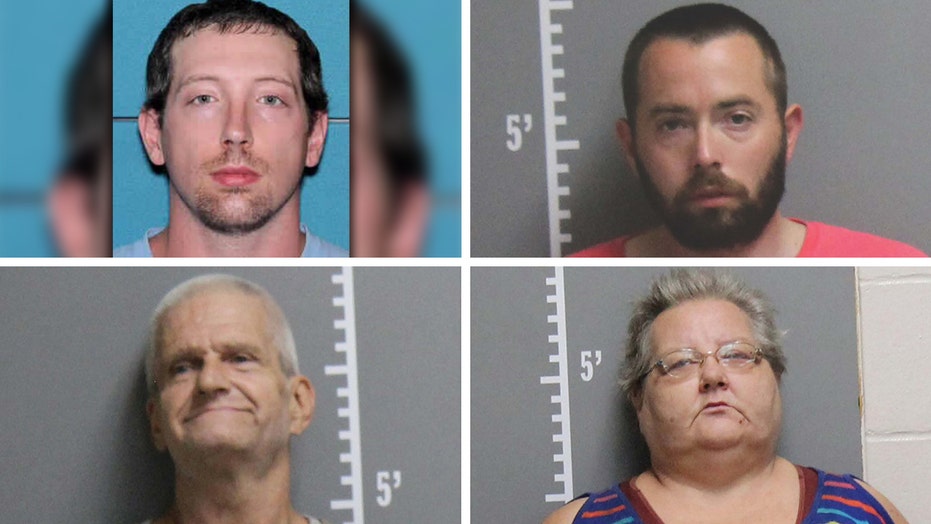 Iowa authorities have arrested four people in connection with the death of a 44-year-old man whose body was found on fire in a ditch in Kellogg last week.

Jasper County deputies and Kellogg volunteer firefighters found the remains of Michael Williams aflame near a park on Sept. 16, according to investigators, who quickly deemed the death a homicide.

They said Williams was strangled Sept. 12 about 10 miles away in Grinnell, where he lived. Then his body was wrapped in a cloth and plastic sheets, driven to Kellogg, dumped and lit on fire

On Tuesday, police said they arrested four suspects, all from Grinnell.

One of them, 31-year-old Steven Vogel, faces charges that include first-degree murder and abuse of a corpse.

Julia Cox, 55, and Roy Lee Garner, 57, are accused of abuse of a corpse, a felony, and misdemeanor charges of accessory after the fact and destroying evidence. The two reside with Vogel, according to the criminal complaint. Authorities did not specifiy their relationship, but court documents suggested Cox might be Vogel's mother.

The body was wrapped and left in their basement for days before it was brought to Kellogg.

Cody Johnson, 29, is charged with abuse of a corpse and being an accessory. He is accused of trying to help Vogel move the body on Sept. 13, but they were unable to get it out of the basement, according to the complaint.

Vogel and Williams knew each other, according to Adam DeCamp, a special agent with the Iowa Department of Public Safety. But investigators said they did not have a motive.

“Evidence and statements gathered during this investigation have shown that Mr. Williams and Vogel were known acquaintances who often socialized within the same circle of friends,” DeCamp said in a statement.

Although Williams was Black and the suspects are White, DeCamp said there is “no evidence” the slaying was racially motivated or a hate crime.

Betty Andrews, president of the Iowa-Nebraska NAACP, said the civil rights organization also found no evidence of race being a motive, according to the Des Moines-based KCCI-TV.

Williams moved to Nebraska and then to Grinnell from Syracuse, N.Y., more than two decades ago, according to the Des Moines Register. He grew up with a learning disability and wanted to live independently, despite coming from a close-knit family. He maintained daily contact with his family and was working in the fast-food industry, until recently.

Relatives told the paper he was a “gentle giant” who liked to dance, loved his family, and was struggling with diabetes and unemployment.

Williams is survived by his parents, five siblings, five children and a 6-month-old granddaughter, according to the Register.