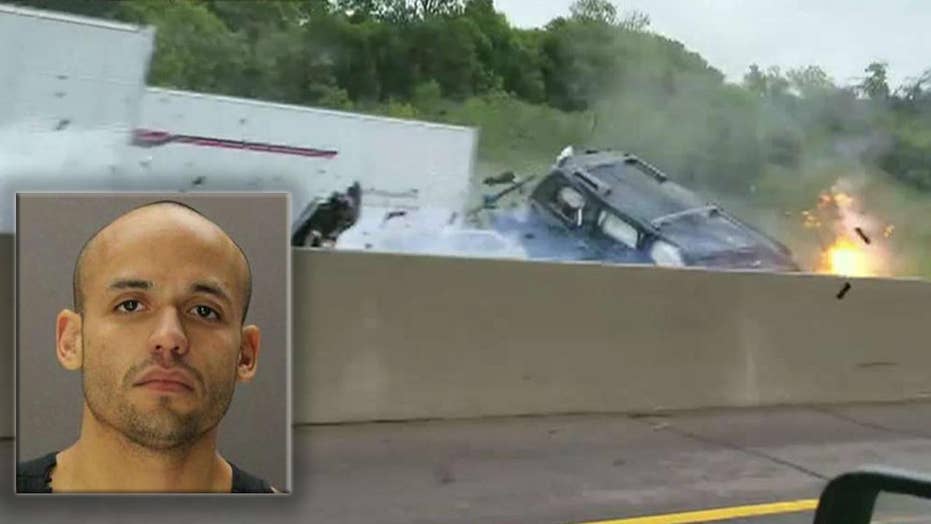 Driver of vehicle going wrong way on Interstate 20, identified as Guillermo Suarez, charged with driving while intoxicated and intoxication manslaughter with a vehicle for crash that left a young mother dead in Texas.

The young mother of a 9-month-old boy died after she collided with a vehicle operated by an intoxicated man driving in the wrong direction on a Texas interstate Sunday, officials said.

The Dallas County Sheriff's Office told WFAA-TV that Guillermo Suarez, 31, was driving a SUV east in the westbound lanes of Interstate 20 in Duncanville when he sideswiped a vehicle, causing a chain-reaction crash and striking another head-on, sending it into an 18-wheeler truck.

In that vehicle was Amberly McCray, 23, of Grand Prairie, who was pronounced dead at the scene. Family members told WFAA she had a 9-month-old son.

Amberly McCray, left, was killed in a crash Sunday after she was hit head-on by a vehicle driven by Guillermo Suarez, right. (Facebook/Dallas County Jail)

Video taken by Roberto Salas before the crash shows Suarez driving the wrong way and avoiding cars before colliding with a vehicle. After the crash, multiple people can be seen trying to get into a wrecked car, while another person is seen lying on the ground.

Suarez's vehicle eventually ended up bursting into flames after coming to rest near the concrete divider.

Flames erupt after a wrong way crash on Interstate 20 in Texas on Sunday. (Roberto Salas via Storyful)

Court records obtained by the Dallas Morning News show that Suarez has a previous DWI conviction, and a lengthy criminal history in Dallas County.

The interstate was closed for several hours on Sunday as authorities investigated the crash, according to NBC5.