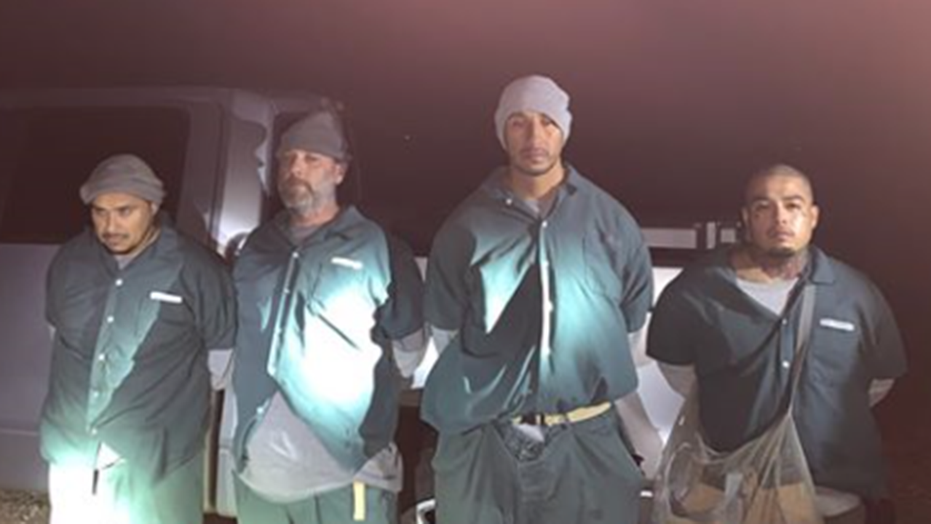 Four Texas federal prison inmates were nabbed over the weekend after escaping to go on a booze run, authorities said.

The quartet was caught late Saturday after being seen leaving the grounds of the Federal Prison Camp in Beaumont and cutting through a ranch, the Jefferson County Sheriff’s Office said in a news release.

“The inmates ran when they saw the Law Enforcement Officers step out of the brush,” the news release said. “All four inmates were quickly taken into custody.”

Authorities say these four inmates were caught after they escaped from the federal prison camp in Beaumont, Texas, Saturday, to go on a booze run. (Jefferson County Sheriff's Office)

At the time, the officers were conducting surveillance behind the prison after “repeated reports of prisoners continuing to escape and bring contraband back into the prison complex,” according to the news release.

Julian Lemus, 34, Robert Young, 45, Leo Martinez 25, and Silvstre Rico, 35, were charged with escape after U.S. Marshals took custody of them.

The camp is a minimum-security lockup.

In July, two inmates serving long sentences on drug convictions escaped from the camp—but never came back. They haven't been caught, according to KDFM-TV.

The station reported that it had documented numerous times in the past 18 months where prisoners go in and out to pick up contraband left for them.

In January, a Beaumont prisoner was arrested after deputies caught him trying to sneak back into the camp with snacks, alcohol, tobacco and cooked food.