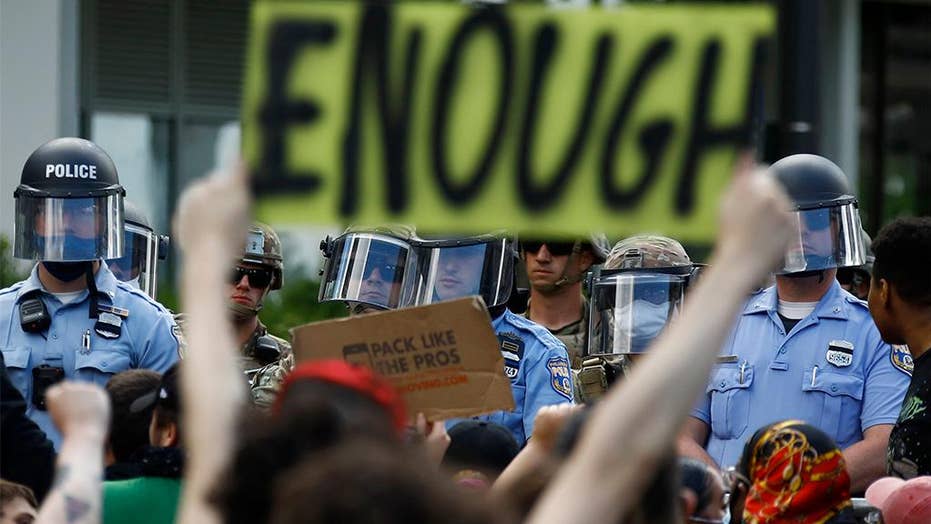 Niece of Martin Luther King, Jr. Alveda King says while there are systemic problems rooted in America, there must be more peaceful protesting instead of outright rioting.

An Illinois man federal prosecutors charged with handing out explosives and saying “we came to riot” at a George Floyd protest in Minneapolis has a history of trouble with the law.

Matthew Lee Rupert, 28, of Galesburg, Ill., described by prosecutors as having "distinctive gold teeth," was charged Monday with civil disorder, carrying on a riot and possession of unregistered destructive devices. Prosecutors in Minnesota said they have evidence showing Rupert participated in the George Floyd protest in Minneapolis on Friday, after traveling from Illinois.

Some of the criminal cases listed for Rupert in the past three years at the Knox County court site in Illinois include more serious charges such as possession of meth; resisting an officer; possession and delivery of firearms (which appears to have been dismissed while he did plea guilty to a theft charge); and domestic battery. A number of these cases appear to be pending and show an upcoming court date in July 2020.

According to an FBI affidavit, Rupert posted self-recorded videos on his Facebook page last week that show him in Minneapolis. In one video, he is seen handing out explosive devices to others and encouraging them to throw them at law enforcement. He’s also shown damaging property and attempting to light a business on fire. In that video, Rupert says: “We come to riot, boy! This is what we came for!”

The charges against Rupert come as civic leaders nationwide have frequently blamed outsiders for bringing trouble into their communities. In Minnesota, Gov. Tim Walz made the assertion in the early days of protests that outsiders were responsible for most of the violence. He later backed away from that, and arrest data so far have showed most people taken into custody were from Minnesota.

But authorities have also said they have made arrests involving people with equipment, including incendiary devices, that could be used to burn and damage. Public Safety Commissioner John Harrington said authorities in the Minneapolis area had stopped cars without license plates, driving without lights, then found such material inside. Harrington said Monday he had at least two confirmed incidents and was working to verify other reports.

The FBI affidavit says that on Thursday, Rupert posted references to the protests in Minneapolis on his Facebook page, and later that night he said he was heading there. By Friday, he was posting videos of himself in Minneapolis.

One video lasts more than two hours. In it, Rupert references SWAT vehicles and says, “I’ve got some bombs if some of you all want to throw them back … bomb them back … here I got some more … light it and throw it.” As he is making the comments, he hands out an item with a brown casing and a green wick. Shortly after one person throws a device, an explosion can be heard in the background.

In that same video, he is seen entering a boarded-up liquor store, then asking for lighter fluid and entering a Sprint store that he says he lit on fire. He is then seen entering and stealing from an Office Depot, according to the affidavit.

The FBI affidavit says that on Saturday, Rupert posted on his Facebook page that he was headed to Chicago, and that he would “loot” there. Early Sunday morning, he posted more videos of himself in and around Chicago. In one video, he talks about starting a “riot” and causing damage.

He was arrested early Sunday by Chicago police for violating an emergency curfew in the city. Officers found several destructive devices, a hammer, a heavy-duty flashlight and cash in his vehicle, according to the affidavit.

Rupert appeared in federal court in Chicago for a hearing to have him moved to Minnesota to face charges. It was not immediately clear if he had an attorney to comment on his behalf.