"Gianno is a big brother that works hard every day. He gets up every day trying to make it — not just for himself — but being a role model for his family. He makes money. He supports his family. You have to have someone like Gianno that's going to support their families," Ford told Fox News Digital. "And I think he will turn his pain into purpose and be a bigger support for many more people. So, Christians's death will really embolden Gianno and his efforts to help these communities."

Ford, a longtime friend of Caldwell's, added that "one of the reasons why Gianno works so hard is because he wanted to move his family out of poverty."

"This is a setback because he didn't get to move his brother out before the streets took his life," he continued. "So, I think Gianno has to work harder. He's got to do more right now and do more so that we can change the trajectory of people's lives in these communities because that's where his heart is. And his heart is actually in the city of Chicago, not just for Christian and his brothers, but for all of these communities that he played in as a young boy growing up."

Fitzgerald said communities of color are attending funerals "far too often," and "it's emblematic of a larger problem" within those communities.

"Making reform a true reform doesn't mean we have to reform and be soft on crime. True reform doesn't mean that we neglect our police departments and don't support the fact that they're here to provide safety and security," he explained. "What gets lost is the people that are in racially polarized communities across our country that really do support police and really want law and order in the community. And when crimes like these happen, that affects generations."

Christian was one of three victims shot on the night of June 24 on the 11400 block of S. Vincennes Ave — the other two of whom were wounded, according to the Chicago Police Department. The other victims, a 31-year-old male and 25-year-old female, were unknown to Christian, who was out with friends at the time.

Fox News analyst Gianno Caldwell is looking for answers after his 18-year-old brother, Christian, was fatally shot in Chicago on Saturday. (Gianno Caldwell)

An unidentified male offender entered a black sedan and fled the scene eastbound after the shooting, according to CPD. The Department has not shared any further updates since the incident occurred.

Davis said his own sons and other family members, as recently as last week, "were victims of violence in the Chicagoland area."

"Thank God it did not end up that they lost their lives. But nonetheless, I can't imagine what they're going through," Davis said of Caldwell's family. "My prayers are with them. That's why I'm here today, is to show support for them. … This is not something that they're going to ever get over. They'll learn to deal with it as best they can. And I hope that through this — that they can continue to be advocates for minimizing violence that is going on, not just here in Chicago, but in every community." 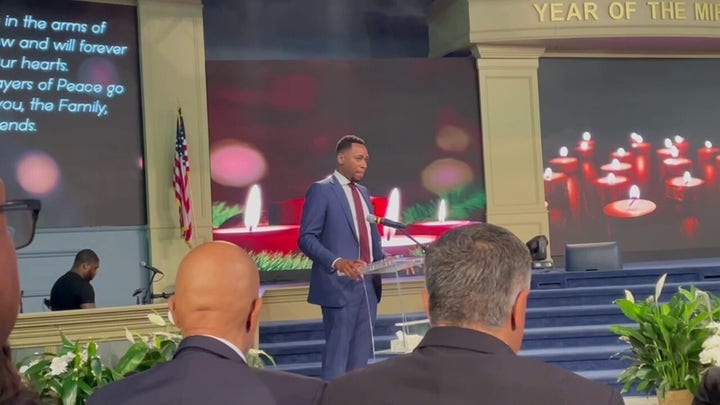 Fitzgerald described an "undercurrent… of recklessness among some teens" and "some adults." The "proliferation of guns" in violence-riddled communities leads to "acts of violence because they fall into the hands of those folks who indiscriminately shoot."

MOTHER OF 4-YEAR-OLD KILLED IN CHICAGO FIGHTS FOR JUSTICE IN UNSOLVED MURDER: ‘GRIEF HAS BECOME A LUXURY’

Davis echoed that sentiment, saying that police and communities of color need to "partner" with each other, instead of seeing each other as threats, in an effort to curb violence in certain areas.

Christian was remembered for his smile, his love for his friends and family, as well as his interest in sports, video games and music.

Caldwell and his brother were two of nine siblings who grew up poor in Chicago. He has repeatedly criticized the city's "soft-on-crime" policies that allow repeat offenders back on the streets. Born in 2004, Christian was the youngest of the nine siblings and had just turned 18 this year. Caldwell previously told Fox News Digital that Christian and his other younger brothers are more like his sons since Caldwell is the father figure in their lives.

Christian was buried in Oak Park Cemetery on Saturday afternoon.