Fox News contributor Gianno Caldwell delivers a eulogy for his younger brother, Christian, who was fatally shot in Chicago on June 24.

Mourners gathered at the Living Word Christian Center in Forest Park, a suburb of Chicago, from across the country to celebrate Christian's life.

In his eulogy, Caldwell began by quoting Martin Luther King Jr.: "Injustice anywhere is a threat to justice everywhere."

"Knowing that my baby brother Christian was murdered, and certainly not the intended target, is an injustice that we're rallying against," Caldwell said. "We're also thinking about those who we don't know their names. The hundreds of people who are murdered in Chicago on a yearly basis. Those folks deserve justice, as well."

He continued: "The flame has been ignited in me to ensure that the people of Chicago — brothers and sisters who are losing their lives — have a voice, have a platform. And they can hear and be heard. The police say Christian was in the wrong place at the wrong time. How many [times] have we heard that story?"

Christian was one of three victims shot on the night of June 24 on the 11400 block of S. Vincennes Ave — the other two of whom were wounded, according to the Chicago Police Department. The other victims, a 31-year-old male and 25-year-old female, were unknown to Christian, who was out with friends at the time.

An unidentified male offender entered a black sedan and fled the scene eastbound after the shooting, according to CPD. The Department has not shared any further updates since the incident occurred.

GIANNO CALDWELL RIPS SOFT-ON-CRIME POLICIES IN CHICAGO, NYC: EVEN LIBERALS KNOW ‘THIS HAS GONE TOO FAR’

The Fox News analyst added that communities need to unite, support police and each other, to stop the violence in cities like Chicago. 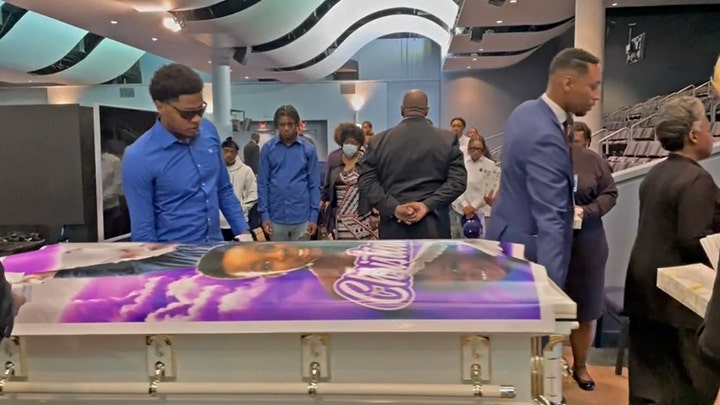 Christian was remembered for his smile, his love for his friends and family, as well as his interest in sports, video games and music.

Caldwell and his brother were two of nine siblings who grew up poor in Chicago. He has repeatedly criticized the city's "soft-on-crime" policies that allow repeat offenders back on the streets. Born in 2004, Christian was the youngest of the nine siblings and had just turned 18 this year. Caldwell previously told Fox News Digital that Christian and his other younger brothers are more like his sons since Caldwell is the father figure in their lives.

Christian was buried in Oak Park Cemetery on Saturday afternoon.