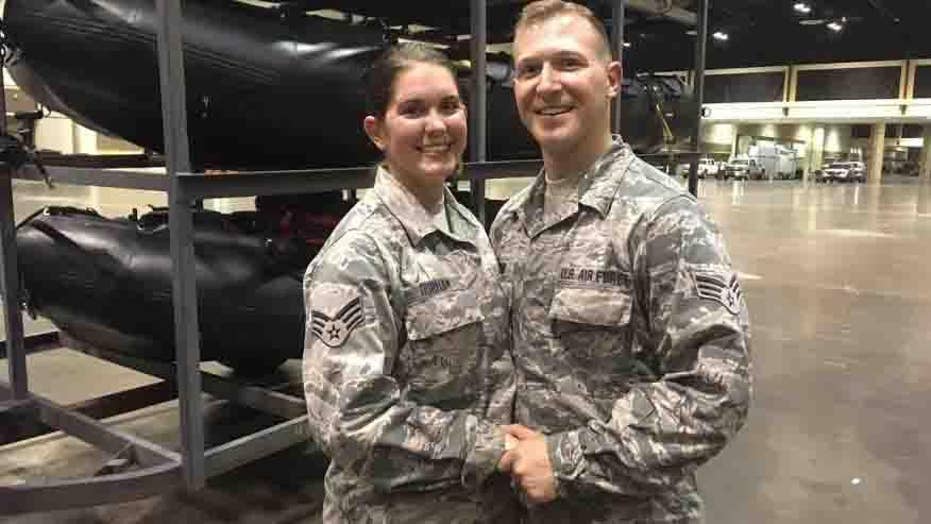 After their beach wedding was cancelled due to Hurricane Irma, a deployed National Guard couple decided to exchange vows in a hanger wearing fatigues

Two senior airmen with the Air National Guard deployed to help out with Hurricane Irma efforts were supposed to get married later in September -- so with the storm on Orlando's doorstep, they raced to tie the knot early on Sunday.

Lauren Durham, 24, and her fiance, 26-year-old Michael Davis, both wore fatigues for the ceremony.

The bride and groom, who had planned a beach wedding, said they were deployed indefinitely and told their out-of-town guests that they’d likely miss their own nuptials.

They were eating breakfast with some friends Sunday morning, and one asked the couple why didn’t they get married in the middle of the storm.

“It started out as a joke, and it just kind of unfolded,” Davis said. “And it turned out to be really great.”

The wedding was officiated by the couple’s best friend in the Guard, who is a notary.

Durham and Davis never thought about trying to beg off duty for their big day.

“Service before self,” Davis said.