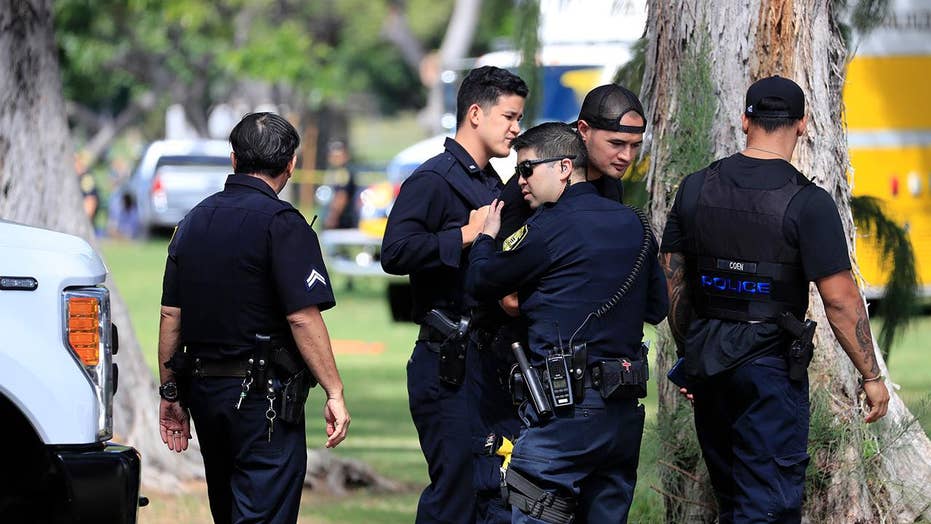 Police say the suspect, who was facing eviction, stabbed his landlady in the leg before opening fire on responding officers; Jonathan Hunt reports from Los Angeles.

Honolulu officials have identified the body of a woman who died when her house caught fire shortly after a tenant fatally shot two police officers.

The remains of Lois Ann Cain, 77, were identified Friday.

Firefighters found another body believed to be shooter Jerry “Jarda” Hanel, the Honolulu Star-Advertiser reported. The identification by the Honolulu coroner was pending notification of next of kin.

In this photo taken Thursday, Jan. 23, 2020, a woman looks at the rubble of a historic residence after a fire destroyed the home following a shooting in Honolulu over the weekend. Residents have been allowed to return to their homes following a suspected landlord-tenant dispute where two police officers were fatally shot and two others died. A fire that followed last Sunday's violence destroyed several homes. (Dennis Oda/Honolulu Star-Advertiser via AP)

Honolulu officers Tiffany-Victoria Enriquez, 38, and Kaulike Kalama, 34, were killed after being dispatched to Cain’s home for a report that Hanel had attacked Cain and another tenant. Police said Hanel stabbed the other tenant.

The violence erupted as Cain was in the process of evicting Hanel. Cain's home was located in an upscale neighborhood near Waikiki Beach police,

Cain rented Hanel a room in exchange for handyman services.

The charred remains of a neighborhood where a fire destroyed several homes after a shooting in Honolulu over the weekend is shown Wednesday, Jan. 22, 2020. Hawaii has some of the nation's strictest gun laws, but the killing of two Honolulu police officers by a man believed to have psychiatric issues has given new urgency to efforts to close gun control loopholes and bolster mental health treatment. (Cindy Ellen Russell/Honolulu Star-Advertiser via AP)

Police said funeral services for Enriquez will be Thursday at Diamond Head Memorial Park. After the funeral, there will be a “final salute” to Enriquez in front of the Honolulu police headquarters.

There was no information available Friday on services for Kalama.