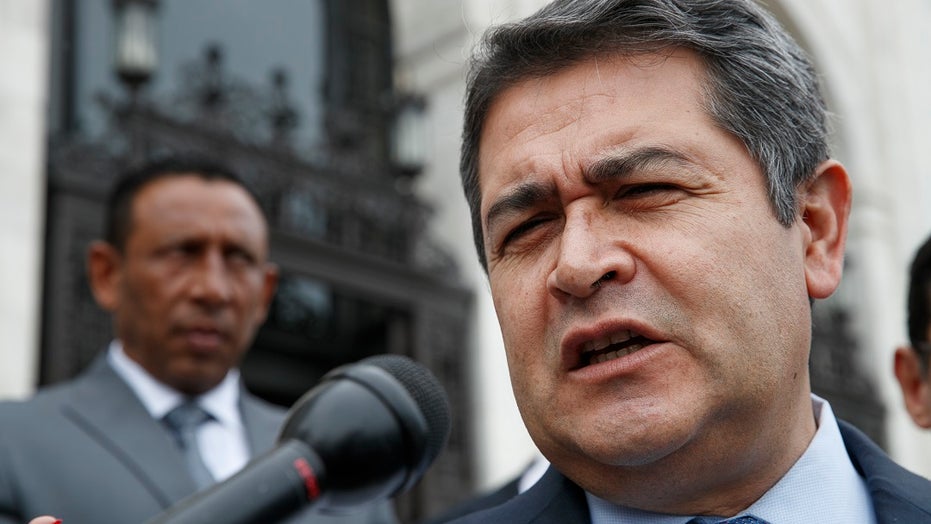 In a statement, the U.S. Attorney’s Office for the Southern District of New York referred to Hernandez as “high-ranking Honduran official” or as “CC-4." Prosecutors said Geovanny Daniel Fuentes Ramirez was arrested at Miami International Airport on Sunday on suspicion of trying to smuggle cocaine into the U.S. and weapons charges.

They said Fuentes Ramirez met with Hernandez on several occasions. In court documents, "CC-4" was identified as the president of the Central American nation and brother of former congressman Juan Antonio Hernández Alvarado, who was convicted on drug charges last year.

Honduran President Juan Orlando Hernandez answers questions from the Associated Press, as he leaves a meeting at the Organization of American States, in Washington. U.S. prosecutors said on Tuesday that Hernandez met with a Honduran drug dealer in 2013 and agreed to facilitate the use of Honduran armed forces personnel as security for the dealer’s drug trafficking activities. (AP Photo/Jacquelyn Martin, File)

Hernandez expressed interest in access to the drug trafficker's cocaine laboratory near Puerto Cortes on the Atlantic coast because of its proximity to the port, according to the DOJ. U.S. prosecutors have linked Hernandez to drug traffickers since he won the presidency in 2013.

He is also accused of using $1.5 million in drug money to get elected. He was reelected in 2017 but the elections were plagued by irregularities. Meanwhile, Hernandez has continued to face pressure to crack down on his country's drug trafficking problems.

Honduras is a major transit hub for illegal drugs.

“Fuentes Ramirez paved the way for unimpeded shipment of multi-ton loads of cocaine by bribing police and a high-ranking Honduran politician, and reporting directly to Tony Hernandez, another co-conspirator in the scheme and himself a former Honduran congressman," U.S. Attorney Geoffrey Berman said.

At his brother's trial in New York last year, prosecutors said Hernandez benefitted from the financial support of drug dealers.

Hernandez Alvarado admitted in 2018 to interacting with drug traffickers and being offered bribes. He is scheduled to be sentenced in April.