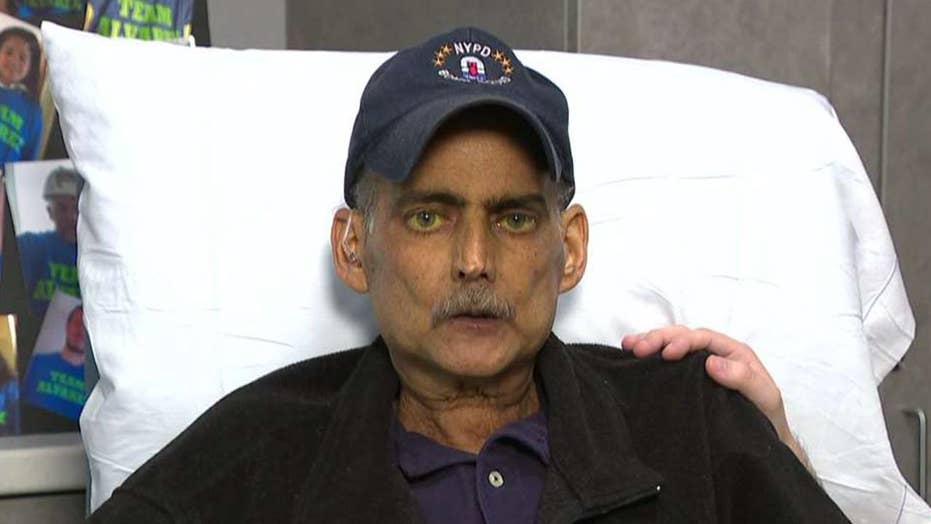 Luis Alvarez's liver is failing and is in hospice care after breathing in toxic dust at Ground Zero.

A 9/11 first responder has died two weeks after an emotional appearance on Capitol Hill with Jon Stewart, his family said Saturday.

Luis "Lou" Alvarez, a former bomb-squad detective for the NYPD, was diagnosed with colon cancer in 2016 and underwent 69 rounds of chemotherapy. He was 53.

"It is with peace and comfort, that the Alvarez family announce that Luis (Lou) Alvarez, our warrior, has gone home to our Good Lord in heaven today," the family said. "Please remember his words, 'Please take care of yourselves and each other.' We told him at the end that he had won this battle by the many lives he had touched by sharing his three-year battle. He was at peace with that, surrounded by family."

The hero cop appeared with Stewart, the former “Daily Show” host, before a House committee June 11 to urge congressional action on renewing the 9/11 Victim’s Compensation Fund.

Stewart drew headlines after criticizing lawmakers who failed to attend the hearing.

“I have been to many places in this world and done many things, but I can tell you that I did not want to be anywhere else but Ground Zero when I was there,” Alvarez testified. “Now the 9/11 illnesses have taken many of us, and we are all worried about our children, our spouses and our families and what happens if we are not here.”

First responders this week met with Senate Majority Leader Mitch McConnell, R-Ky., who said a vote would be held on renewing the fund by August. Stewart had singled out McConnell for criticism over the funding issue.

More than 40,000 people have applied to the compensation fund which covers illnesses potentially related to being at the World Trade Center site, the Pentagon or Shanksville, Penn., after the 2001 attacks, Fox News reported. More than $5 billion in benefits have been awarded out of the $7.4 billion fund, with about 21,000 claims pending.

Alvarez announced he was being treated by hospice nurses on Facebook.

“Hello everyone, ‘I’m still here and still fighting,'’’ he said. “I just wanted to let you know, what is going on with me. Since you have been with me on this 3-year ride. I’m now in hospice, because their (sic) is nothing else the doctors can do to fight the cancer. It had nothing to do with my trip to DC, that was just a coincidence.

He said he was at peace.