Fresh off of his emotional testimony before the House Judiciary Constitution Subcommittee on behalf of 9/11 victims and first responders, Jon Stewart continued to lobby for the cause while expressing great frustration over the need to convince people to help the victims.

The former "Daily Show" host's June 11 appearance went viral after he chastised Congress for failing to act to pass legislation to ensure continued funding for the 9/11 Victims Compensation Fund. On Sunday, he lamented having to do it in the first place.

9/11 FIRST RESPONDER: IS THE VICTIMS' COMPENSATION FUND WHERE WE WANT TO PLANT THE FLAG OF 'FISCAL CONSTRAINT?'

"I think this community is at the end of their rope," he said on "Fox News Sunday." "I think there's a feeling of disbelief, that they can't understand why they have to continually saddle up and ride down to Washington to make these appeals for something that should be simple but is somehow, through politics, made agonizingly difficult."

Without a new bill, the fund is at risk of running out of money next year. Survivors, many of whom suffer from ongoing health problems due to their experiences helping at Ground Zero, would then have trouble getting treatment for their ailments.

After the World Trade Center collapsed as a result of the terror attacks on Sept. 11, 2001, thousands of construction workers, police officers, firefighters, and others spent time working in the soot, often without proper respiratory protection.

More than 40,000 people have applied to the Victim Compensation Fund, which covers illnesses potentially related to being at the World Trade Center site, the Pentagon or Shanksville, Pennsylvania, after the attacks. More than $5 billion in benefits have been awarded out of the $7.4 billion fund, with about 21,000 claims pending.

The current fund allows for claims through 2020, and Stewart is pushing to keep funding so that survivors could make claims and receive money through 2090, so that money remains throughout the lives of the people who need it. Stewart estimated that this would cost an addition $12 billion.

Stewart's testimony before Congress highlighted the juxtaposition of the heroism and quick response by those who put themselves at risk on 9/11, next to the slow movement shown by Congress. 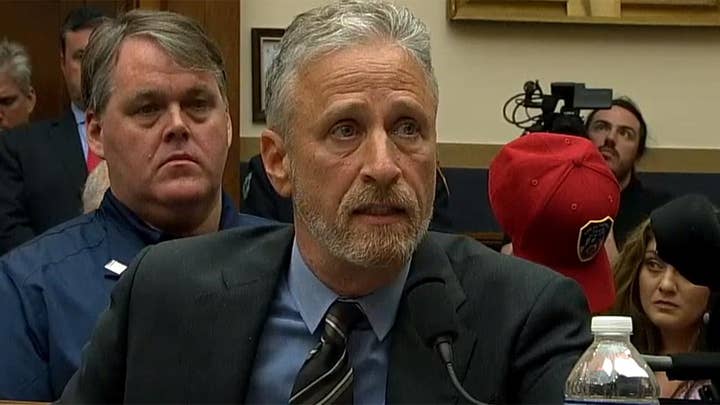 "They responded in 5 seconds," Stewart said of first responders. "They did their jobs with courage, grace tenacity, humility. Eighteen years later, do yours!"

The following day, the full House Judiciary Committee approved the bill, which will next go before the full House, where it is expected to pass before moving to the Senate. Stewart is concerned that Senate Majority Leader Mitch McConnell, R-Ky., is not on board.

"In terms of getting the 9/11 bills passed, Mitch McConnell has been the white whale of this since 2010," Stewart said.

"This is not a Republican-Democrat issue," Stewart clarified, noting bipartisan support for the bill. He claimed that McConnell, however, has used 9/11 bills for political leverage.

"In 2010, he used it to make sure that the Bush tax cuts would be permanent," Stewart recalled. "In 2015, he took it out of the transportation bill because he wanted to extract some promises on oil imports."

"It should be open-ended because cancer doesn't have an expiration date on it," Stewart responded.

Wallace also mentioned claims that the federal government should not be getting involved in the matter because it is a New York issue that should be handled by the state government.

Stewart said that is akin to claiming that Washington should not have gotten involved in the attack on Pearl Harbor because "that's a Hawaii issue."

Stewart's tearful testimony before the House subcommittee included a rebuke of those members of Congress who failed to appear, referencing the many empty chairs. The subcommittee later responded by noting that only two of their members were absent, including Rep. Eric Swalwell, D-Calif., who is campaigning for president. Stewart was unmoved by this.

"They kept saying, 'Well, you know it was a sub-subcommittee,'" he told Fox News after the hearing, "and I'm like, but there's still people on the sub-subcommittee that aren't here.' Either 9/11 was a priority or it wasn't, but at some point match your tweets and your words."