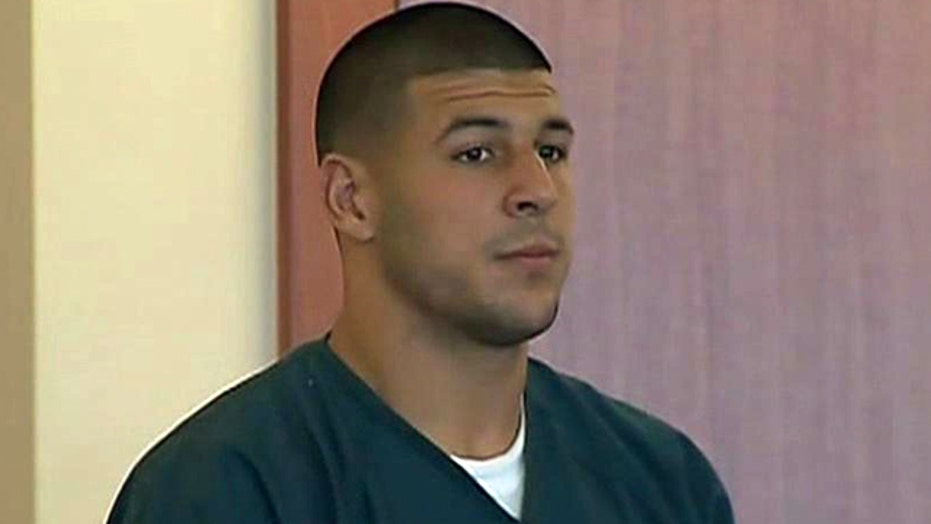 An associate of former New England Patriots tight end Aaron Hernandez said he was told Hernandez fired the shots that resulted in the death of a semi-pro football player, according to documents filed in Florida.

The records, obtained by The Associated Press, also show that a vehicle wanted in a double killing in Boston a year before had been rented in Hernandez's name.

Carlos Ortiz reportedly told Massachusetts investigators that the other man, Ernest Wallace, told him Hernandez admitted to the killing. The gun used in the shooting was not located.

According to an affidavit attached to search warrants unsealed in Massachusetts Tuesday, Hernandez approached police after he noticed them parked outside his North Attleboro home on June 17, the day Lloyd's body was found.

Police said they asked him about an SUV he had rented. Hernandez told them he rented it for Lloyd and had last seen him in Boston the day before, the documents said.

The affidavit then said Hernandez became argumentative, asked "what's with all the questions?" and slammed the door of his house behind him after he was told that police were investigating a death.

He then returned with his attorney's business card, and didn't respond when police told him they were investigating a death.

"Mr. Hernandez slammed the door and relocked it behind him," the records read. "Mr. Hernandez did not ask officers whose death was being investigated. Mr. Hernandez's demeanor did not indicate any concern for the death of any person."

Hernandez came out about 10 minutes later and agreed to be questioned at a police station, according to the documents.

Hernandez is being held without bail after pleading not guilty to murder in the killing of Lloyd, whose bullet-ridden body was found in an industrial area near Hernandez's North Attleborough home.

The affidavit goes on to state that a bullet casing recovered from the 2012 Nissan Altima in which Hernandez was said to be riding the night of the murder was fired with the same weapon as the casings recovered at the scene of Lloyd's murder.

Hernandez’s attorneys claim the evidence against him is circumstantial and that Hernandez is anxious to clear his name.

Eight search warrants were unsealed Tuesday after news organizations sought access to the records. A judge had granted the media requests on Monday.

The search warrants reveal the breadth of the investigation, with authorities scouring through everything from Hernandez's house to the contents of his team locker, which the Patriots had emptied into a container.

According to one of the warrants a semi-automatic rifle was found in a Toyota parked in Hernandez's driveway during a search of the former Patriot's home, MyFoxBoston.com reported. Investigators also reportedly found a loaded glock .45 magazine inside Hernandez's Hummer.

The records also detailed a discussion police had with Hernandez's girlfriend, Shayanna Jenkins, after she dropped him off at the police station.

The affidavit states that Jenkins immediately began to cry when police pulled her over and agreed to answer questions right there. Jenkins indicated she has seen Hernandez and Lloyd together that Saturday and that Lloyd was a marijuana dealer.

She also said she had been out to a Father's Day dinner with Hernandez on June 16, but they returned home early and she went to bed. She said Hernandez was away that night and she didn't know who he was with.

The records said Jenkins then received a call from Hernandez, who told her his agent had advised him to tell her not to speak to police.

Also Tuesday, Ortiz, who faces a gun charge in the case, agreed to remain in jail until a hearing next month.

Ortiz, 27, appeared in Attleboro District Court, where a hearing to determine if he is a danger to the community was scheduled for Aug. 14. If Ortiz is determined to be dangerous, he can be held without bail for 90 days.

Ortiz is from Hernandez's hometown of Bristol, Conn., and was with Hernandez when they picked up Lloyd the night he was killed.

Wallace, another man who was with Hernandez that night, according to police, pleaded not guilty Monday to an accessory to murder charge in the case. Wallace, 41, of Miramar, Fla., will be held without bail until another hearing on July 22, under an agreement between his attorney and prosecutors.