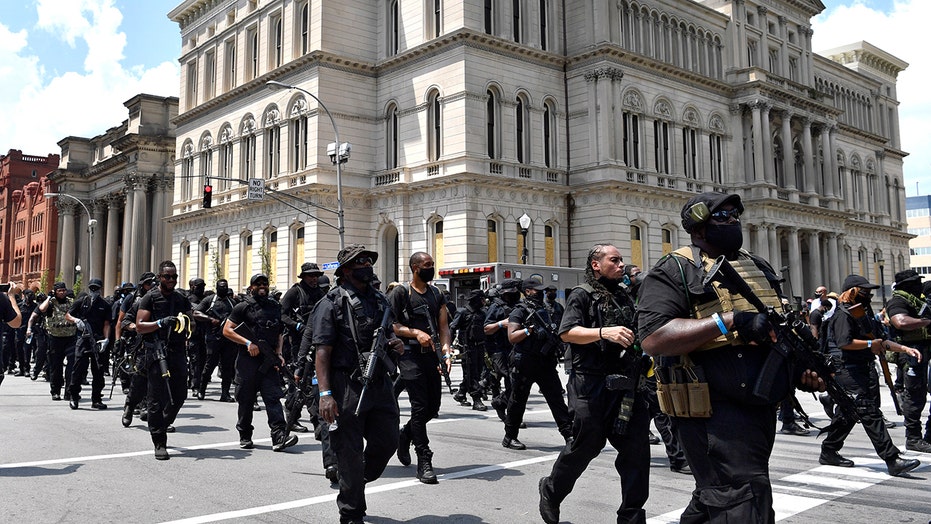 Opposing militias met in downtown Louisville on Saturday, ending a tense standoff without any violence, according to authorities.

The Louisville Metro Police Department claimed to have advanced warning about two heavily armed militias that planned to protest on Saturday. The “Three Percenter” militia gathered in counter protest to the Not F------ Around Coalition, an Atlanta-based group that had traveled to Louisville to demand justice for Breonna Taylor.

The “Three Percenter” militia claimed it showed up in response to NFAC and to aid police, according to the Louisville Courier-Journal. Near Metro Hall, the two groups met, with police in riot gear and helicopters at the ready in case of violence.

Armed members of the "NFAC" march through downtown Louisville, Ky., toward the Hall of Justice on Saturday, July 25, 2020. Hundreds of activists demanded justice for Breonna Taylor during the demonstrations in her hometown that drew counter-protesters from a white militia group. Taylor, a 26-year-old EMT, was fatally shot when police officers burst into her Louisville apartment using a no-knock warrant during an investigation. (AP Photo/Timothy D. Easley)

“We were aware of these groups coming to protest,” the LMPD told Fox News. “As we do with all anticipated protest activity, LMPD makes an effort to reach out to organizers to get an understanding of what to expect during a particular protest event.”

“LMPD personnel did reach out to organizers of this group planning to counter-protest this weekend to get information for our planning purposes, but in no way did LMPD express support for any disruptive actions being taken by this group or any other.”

LOUISVILLE, KY - JULY 25: Members of a protestor group affiliated with NFAC, most carrying firearms, gather to march on July 25, 2020 in Louisville, Kentucky. The group is marching in response to the killing of Breonna Taylor. (Photo by Brett Carlsen/Getty Images)

"If you don't tell us nothing we going to think you ain't doing nothing," Johnson said.

The “Three Percenter” militia, named for the supposed 3 percent of colonists who took up arms against the United Kingdom during the American Revolution, warned members to keep calm and “don’t fire unless fired upon.”

After Johnson’s speech demanding answers within the next few weeks, the NFAC marched out of downtown.

An armed member of the "NFAC" scans the crowd during a march through downtown toward the Hall of Justice in Louisville, Ky., Saturday, July 25, 2020. Hundreds of activists demanded justice for Breonna Taylor during the demonstrations in her hometown that drew counter-protesters from a white militia group. Taylor, a 26-year-old EMT, was fatally shot when police officers burst into her Louisville apartment using a no-knock warrant during an investigation.(AP Photo/Timothy D. Easley)

The police were relieved that no violence had occurred during the confrontation. Earlier in the day, however, an NFAC member’s weapon went off, injuring three people, though none of the injuries were life-threatening.

“This is a tragic situation that could have been much worse,” Louisville Metro Police Chief Robert Schroeder said in a news release. “I encourage anyone choosing to exercise their Second Amendment rights to do so responsibly.”

Police made 11 arrests for various offenses, including obstructing a roadway, interfering with a governmental operation and fleeing and evading, but none for gunfire or the shootings.

“We support everyone’s rights to peacefully protest,” the LMPD said in a statement. “We will protect that right.”