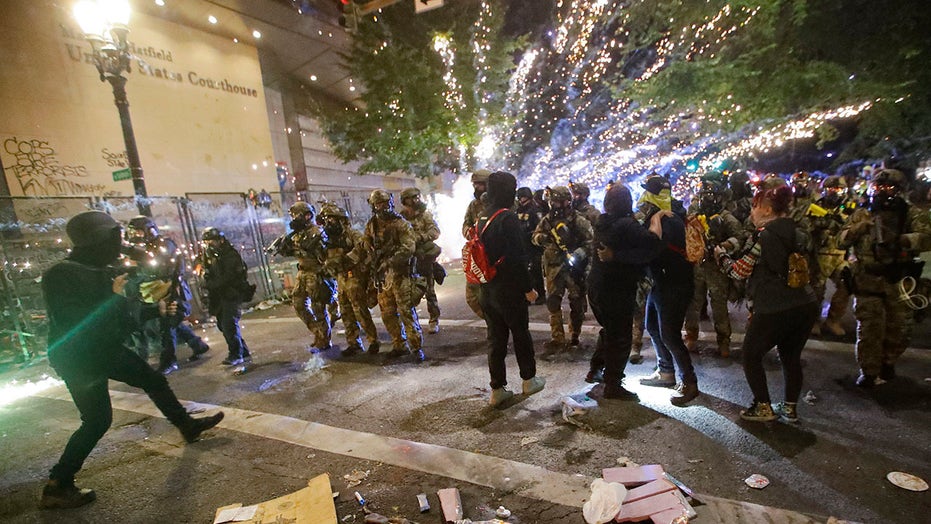 Another night of rioting and lawlessness exploded in more than half a dozen U.S. cities Saturday night -- with the mayhem including damage to federal buildings, local police precincts, and a fatal shooting in Austin, Texas.

Similar protests and violent demonstrations have been seen across the country following the death of George Floyd, a Black man in Minnesota who died while in police custody. A video of the May 25, 2020, encounter with police officers showed a White officer putting his knee on Floyd's neck for more than 8 minutes. Floyd died later that day.

Floyd's death -- as well as the police shooting death of Breonna Taylor in Louisville, Kentucky, and other Black men and women -- sparked widespread protests and demonstrations in the U.S. and across the world, which still continue in some cities to this day.

Here’s a recap of some of the developments in a sampling of cities.

A huge crowd that included the Wall of Moms and the Wall of Vets turned out for yet another day and night of rioting and lawlessness in Portland, Ore., a city that has seen more than 50 consecutive days of such behavior since Floyd's death.

Federal agents assigned to guard the building deployed tear gas and the Portland police declared the scene a riot around 1:15 a.m. local time, the report said.

Saturday night’s demonstration followed what the news outlet said was a familiar pattern: Hours of peaceful protests that eventually devolve into destruction and attacks against police.

Social media posts also showed a crowd outside a Marriott hotel that was said to be where federal officers deployed to the city were staying.

At one point during Saturday’s daylong protests in Seattle, rioters threw an explosive device that created an eight-inch hole in a wall of the police department’s East District, police Chief Carmen Best said, according to the Seattle Times.

“What we saw today was not peaceful,” Best said. “The rioters had no regard for the public’s safety, for officers’ safety or for the businesses and property that they destroyed.”

“What we saw today was not peaceful. The rioters had no regard for the public’s safety, for officers’ safety or for the businesses and property that they destroyed.”

Police reported making 45 arrests near the East Precinct as of 10 p.m. local time. They said 21 officers were hit by bricks, rocks and explosives. Most of the injured officers were able to return to work, police said in a Twitter message.

Conditions in the area had been declared a riot at 4:30 p.m. after police officers were being assaulted and protesters failed to disperse, Q13 FOX of Seattle reported.

Best said police planned to use less-lethal crowd management tools, but not tear gas, despite a federal judge’s decision late Friday blocking a city council ban on the equipment that was scheduled to take effect Sunday, the Seattle Times reported.

A Starbucks store was destroyed and other businesses were covered with graffiti, the outlet reported.

A protester wrapped in an American flag spray painted with "Black Lives Matter" marches down a street during a protest on Saturday, July 25, 2020, in Oakland, Calif. (Associated Press)

A fatal shooting occurred around 9:50 p.m. during a protest in the city, according to reports.

Police said a man carrying a weapon approached a vehicle – but a person inside the vehicle fatally shot the man, the Austin American Statesman reported.

Medics arriving at the scene assisted the victim but were unsuccessful, the newspaper reported.

Police were in contact with the shooter, who was cooperating with authorities, the report said.

One witness said the victim was well known to many protesters, and a group of people was seen grieving at the scene, the newspaper reported.

A frightening moment happened along Interstate 225 when a vehicle drove through a crowd of marchers in Aurora, Colo., The Guardian reported. At least one person was struck by the vehicle and was taken to a hospital.

Elsewhere in the city, demonstrators pushed down a fence, threw objects at police officers, broke windows and started a fire inside the city’s courthouse on Saturday night, Denver’s KCNC-TV reported.

The unrest was associated with the death of Elijah McClain, a Black man who died after an altercation with police nearly a year ago, the station reported.

Aurora police tweeted photos of smashed windows and damaged fencing at the courthouse.

A protester holds a homemade riot shield during a protest in front of the Oakland Police Department Station on Saturday, July 25, 2020, in Oakland, Calif. (Associated Press)

It was not immediately clear if police made any arrests, according to the news outlet.

Hundreds of protesters marched through downtown Oakland, smashing windows of the city’s police headquarters and setting a fire inside the Alameda County courthouse, according to reports.

Oakland police confirmed much of the violence via Twitter messages.

The crowd had broken through barricades set up outside the courthouse, San Francisco’s KPIX-TV reported.

Protesters light fireworks in the middle of downtown Oakland during a protest on Saturday, July 25, 2020, in Oakland, Calif. (Associated Press)

Between 75 and 80 protesters were taken into custody after police declared an unlawful assembly, the Omaha World-Herald reported.

The crowd started blocking traffic around 9:15 p.m. and police were seeing Facebook posts suggesting that damage was being planned for the downtown area.

“It leaned toward the potential of getting violent,” Omaha Police Capt. Mark Matuza told the newspaper.

The crowd was protesting the May 30 shooting death of James Scurlock, 22, for which Douglas County Attorney Don Kleine declined to file charges, the World-Herald reported – but Kleine agreed two days later to let a grand jury review the case.

Scurlock was allegedly fatally shot by bar owner Jake Gardner amid a protest in Omaha’s Old Market area, according to the newspaper.

Rioting in the nation’s second-largest city on Saturday night included broken windows and graffiti at a federal courthouse in the downtown area and police in riot gear facing off against a crowd near City Hall, the Los Angeles Times reported.

Earlier, demonstrators marched along a stretch of Highway 101.

Sgt. Anthony Costello of the Los Angeles Police Department confirmed that some arrests were made, including for vandalism, but was uncertain how many rioters had been apprehended.