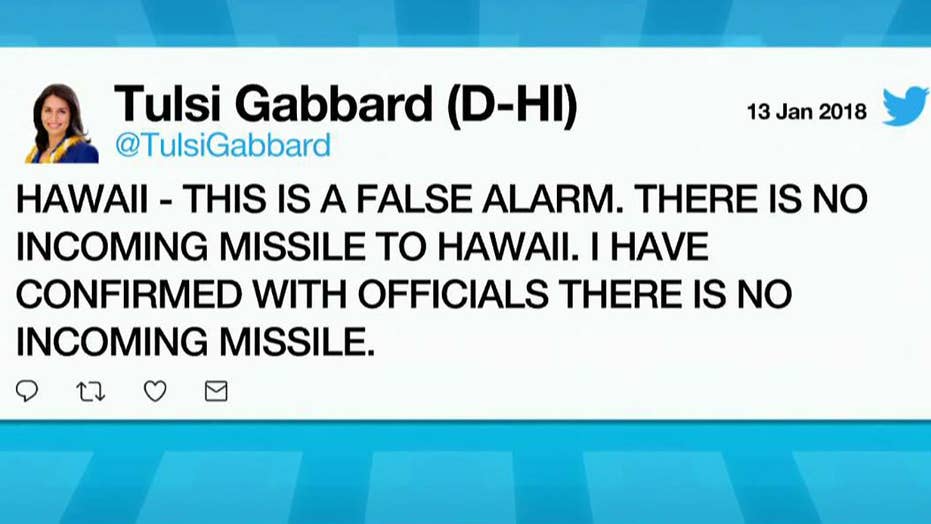 After Hawaii emergency officials confirmed that an alert about an inbound ballistic missile was a mistake, they said the employee who pushed the wrong button feels awful about the panic-inducing incident.

An emergency alert of Hawaii's Emergency Management Agency, which was sent to the islands early Saturday morning, read: "BALLISTIC MISSILE THREAT INBOUND TO HAWAII. SEEK IMMEDIATE SHELTER. THIS IS NOT A DRILL."

"This guy feels bad, right. He's not doing this on purpose - it was a mistake on his part and he feels terrible about it," said Miyagi in a press conference Saturday afternoon.

Miyagi, a retired Army major general, said the employee would be "counseled and drilled so this never happens again," but he did not say whether there would be disciplinary measures.

Will Carr reports from Honolulu, HI

Rather than triggering a test of the system, it went into actual event mode. He confirmed that to trigger the alert, there is a two-step process involving only one employee — who both triggers the alarm, then also confirms it.

"There is a screen that says, 'Are you sure you want to do this?'" Miyagi said. The employee confirmed the alert, inadvertently causing a panic in a state already on edge over saber-rattling missile threats from North Korea.

Hawaii Gov. David Ige said in a statement Sunday that the false alert was "an unfortunate situation that has never happened before and will never happen again."

"On behalf of the State of Hawai'i, I deeply apologize for this false alert that created stress, anxiety and fear of a crisis in our residents and guests," Ige said.

At about 8:07 a.m. local time, Hawaii citizens received an emergency alert on their phone that read: “BALLISTIC MISSILE THREAT INBOUND TO HAWAII. SEEK IMMEDIATE SHELTER. THIS IS NOT A DRILL.”

At 8:20 a.m. local time, Hawaii EMA tweeted that there was “NO missile threat” to the state. However, the tweet didn't reach people who aren't on the social media platform.

Roughly 15 minutes later, the U.S. Pacific Command issued a statement, clarifying there was "no ballistic missile threat to Hawaii."

It wasn't until 38 minutes after the first warning — at 8:45 a.m. — that Hawaii's EMA alerted mobile devices across the islands that that initial alert was a false alarm.

"If it was a mistake and someone pushed a button they shouldn’t have pushed, then why the 38 minute delay?" asked Rep. Colleen Hanabusa, D-Hawaii, in an interview with Fox News. "The next question is, why don’t we have a better fail-safe?"

Hanabusa, a member of the House Armed Services Committee, vowed she would hold Capitol Hill hearings about the incident.

Hawaii resident on receiving missile alert: It was chaotic

"The real issue that I think we as a state now has to deal with is how do you build back public confidence and public trust?" Hanabusa said. "So the first thing we’ve got to do is explain to people how it happened ... and why we were unable to correct it."

At the news conference late Saturday, Miyagi said that there will now be a two-person rule implemented for sending test alerts and actual alerts. He also offered an apology for the stresses resulting from the false alarm.

"I deeply apologize for the trouble and the heartbreak that we caused today," Miyagi said, taking responsibility for the incident as he called it a result of human error. "We made a mistake."

He added that EMA will "hold off" on future tests of the system "until we get this squared away."

What if missile threat alert had not been a false alarm?

Gov. Ige said Saturday is "a day that most of us will never forget," a day Hawaii residents thought "our worst nightmare might be happening."

"I know firsthand that was happened today was totally unacceptable and many in our community was deeply affected by this," Ige said. "And I'm sorry for that pain and confusion that anyone might've experienced."

Hawaii House Speaker Scott Saiki said the system state residents have been told to rely on failed miserably on Saturday.

"Clearly, government agencies are not prepared and lack the capacity to deal with emergency situations," Saiki said. He also noted that the State House would begin an immediate investigation.

Many social media users posted footage of the emergency alert being broadcast on local television.

"The U.S. Pacific Command has detected a missile threat to Hawaii. A missile may impact on land or sea within minutes. This is not a drill," the television broadcast stated. "If you are indoors, stay indoors. If you are outdoors, seek immediate shelter in a building. Remain indoors well away from windows."

"If you are driving, pull safely to the side of the road and seek shelter in a building or lay on the floor. We will announce when the threat has ended. This is not a drill. Take immediate action measures," the broadcast concluded.

Fox News' Chad Pergram spoke with two people on the Kona side of the Big Island who said they were told to stay in their hotel room and that there was a missile incoming.

One Twitter user posted a photo of a message board on a Hawaiian highway that read: "MISSILE ALERT IN ERROR THERE IS NO THREAT."

Sen. Brian Schatz, D-Hawaii, tweeted: "There is no missile threat. It was a false alarm based on a human error. There is nothing more important to Hawaii than professionalizing and fool-proofing this process."

In a follow-up tweet, he adopted a stern tone: "What happened today is totally inexcusable. The whole state was terrified. There needs to be tough and quick accountability and a fixed process."

Sen. Mazie Hirono, D-Hawaii, tweeted that she would work to find out what occurred.

A White House official said President Trump, who is spending the weekend in Florida, had been briefed on the episode, which they said "was purely a state exercise."

Ige said in an earlier statement that "while I am thankful this morning’s alert was a false alarm, the public must have confidence in our emergency alert system. I am working to get to the bottom of this so we can prevent an error of this type in the future."

Federal Communications Commission Chairman Ajit Pai said in a statement that the false alarm was "absolutely unacceptable" and an investigation by the agency was underway.

State officials say emergency alert that said a missile was inbound was sent out by mistake.

"Based on the information we have collected so far, it appears that the government of Hawaii did not have reasonable safeguards or process controls in place to prevent the transmission of a false alert," Pai said. “Moving forward, we will focus on what steps need to be taken to prevent a similar incident from happening again."