Hawaii’s Mauna Loa is erupting for the first time in nearly 40 years, and according to scientists and officials, it does not appear to pose a threat to nearby communities.

Mauna Loa is the world’s largest and most active volcano, and on Monday it started blowing smoky ash into the air and orange lava down terrains on the big island of Hawaii.

Lava began to spew from Moku‘āweoweo, the summit caldera of the Mauna Loa volcano, at approximately 11:30 p.m.

The Hawai’i County Civil Defense Agency issued a red alert as soon as the volcano erupted, saying lava flows were contained within the summit area and not threatening down slope communities.

Three hours later, the agency notified the public that shelters were opened at Old Kona Airport in Kailua-Kona and Ka’u Gymnasium in Pahala, adding that the lava activity remained confined to the summit.

The agency’s latest announcement made on Monday was that lava exited the summit and was visible in the northeast rift zone, but still did not pose a threat to any communities.

The County Civil Defense pulled information from the U.S. Geological Survey, which has stayed on top of the eruption since it began.

According to the Associated Press, the USGS warned the people on Hawaii that eruptions were dynamic, and lava flows could change rapidly, warning residents to be ready for worsening conditions.

Rift zones, like the one where the lava appeared to be exiting the summit of Mauna Loa, are weakened areas that make it easier for magma to emerge.

In this aerial photo released by the U.S. Geological Survey, the Mauna Loa volcano is seen erupting from vents on the Northeast Rift Zone on the Big Island of Hawaii, Monday, Nov. 28, 2022. Hawaii's Mauna Loa, the world's largest active volcano, began spewing ash and debris from its summit, prompting civil defense officials to warn residents on Monday to prepare in case the eruption causes lava to flow toward communities. (U.S. Geological Survey)

Although the rift zone to the northeast does not put the immediate communities to the south or west in danger, Hilo and other towns could eventually wind up in the pathway of the lava. Of course, it could take weeks or months to reach those areas that are populated, according to the AP.

If the lava shifts to a different rift zone to the southwest, it would only take hours or days to reach populated communities, the AP said.

Seismic activity around Mauna Loa increased in the days leading up to the eruption.

The County Civil Defense started relaying reports from USGS of small seismic earthquakes beneath the volcano in September, and as the days ensued, the number of earthquakes increased, and tsunami warnings were triggered.

Mauna Loa is seen from the Gilbert Kahele Recreation Area off Saddle Road on the Big Island of Hawaii on Oct. 27, 2022. The ground is shaking and swelling at Mauna Loa, the largest active volcano in the world, indicating that it could erupt. Scientists say they don't expect that to happen right away but officials on the Big Island are telling residents to be prepared in case it does erupt soon. (Megan Moseley)

The agency issued the first yellow alert on Oct. 19 after 18 small earthquakes less than 3.0 magnitude were detected.

Some days there would be more than 40 earthquakes of 3.0 magnitude or less and the status in each warning was that Mauna Loa was not erupting and, "there are no signs of an imminent eruption" – until last night.

Mauna Loa is part of a cluster of five volcanoes that make up the island of Hawaii, located at the southern end of the Hawaiian chain.

The volcano has a peak altitude of 13,670 feet above sea level, and when it erupted in 1950, it took lava from the mountain less than three hours to travel 15 miles to the ocean.

Its last eruption was in 1984, when it spewed lava for 20 days. Sunday night’s eruption interrupted the volcano’s longest quiet period in recorded history. 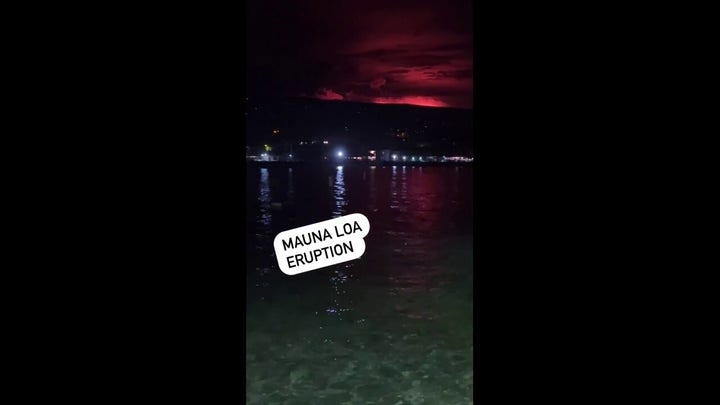