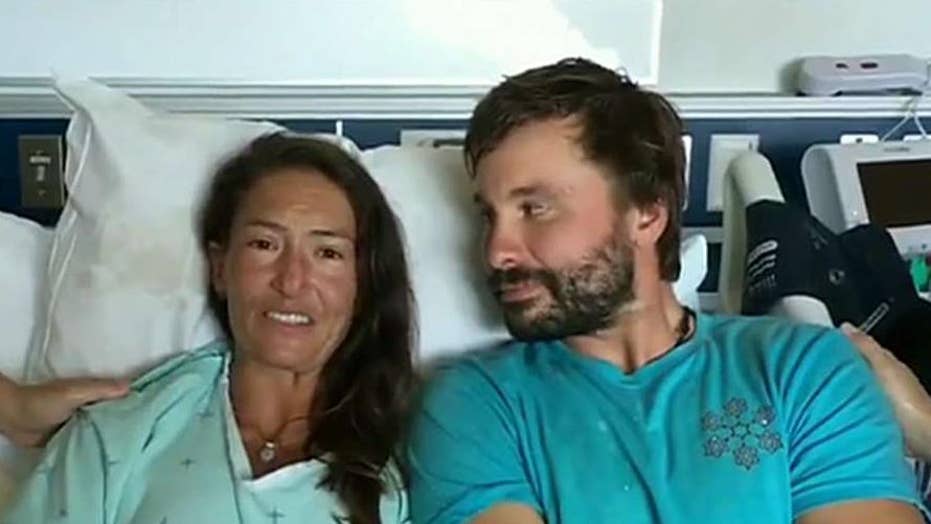 Amanda Eller gives an emotional statement during her recovery.

The woman who survived for over two weeks in a Hawaii forest before being rescued spoke out from her hospital bed on Saturday on her harrowing ordeal with a message for all who helped search for her: thank you for not stopping.

Amanda Eller, 35, was found injured in the Makawao Forest Reserve on Friday after going missing on May 8, sparking a search of the area that included hundreds of volunteers.

"The last 17 days of my life have been the toughest days of my life," a tearful Eller said alongside family members in a video posted to Facebook. "It’s been a really significant spiritual journey that I was guided on, and there were times of total fear and loss and wanting to give up and it did come back to life and death and I had to choose, and I chose life. I wasn’t gonna take the easy way out."

Eller praised the Maui community and those who continued to pray for her to make it out of the woods alive.

"It just warms my heart," she said.

Amanda Eller lived off plants, moths, and whatever came to hand while lost for 17 days in a Hawaii forest. (Javier Cantellops via Storyful)

Doctors discharged her from the hospital late Saturday, expecting she'll make a full recovery. "The staff and physicians at Maui Memorial Medical Center involved in her treatment and care are rejoicing at the miraculous news of her great outcome," Maui Health System CEO Michael Rembis said.

Eller was last seen on surveillance video May 8 leaving the Haiku Post Office and her car was discovered at Makawao Forest Reserve later that day. Friends and family believed she went for a hike or run in the forest, and had been searching the area since then.

Eller told the New York Times she intended to go on a short trail walk as she had done previously, but had gotten turned around after taking a brief rest. On her third day of being lost, she fell 20 feet off a cliff that fractured her leg and tore the meniscus in her knee.

"The whole time I was going deeper into the jungle, even though I thought I was going back where I came from," she told the paper.

The 35-year-old told the New York Times she would cover herself in ferns, even sleeping in the mud at night to keep warm all while eating whatever she could find to survive.

Amanda Eller was found on Friday after being lost for 17 days in a Hawaii forest. (Javier Cantellops via Storyful)

Javier Cantellops, a member of the search team, recorded video of Eller being lifted to safety by helicopter after his team spotted her from the air near the Kailua reservoir.

"It's been an emotional roller-coaster that I think all of us have been on and are very happy to get off of," he said Saturday outside a hospital. "It's been a surreal moment."

Dr. Zora Bulatovic, who is currently treating Eller, told reporters Saturday she is doing well but fractured her tibia and sustained severe burns to her lower extremities from sun exposure, according to Hawaii News Now. A photo of one of the burns was posted to Facebook.

"I can't believe she did what she did with that kind of fracture but she'll recover from it," Bulatovic said. "It will take time"

Julia Eller, Amanda Eller's mother, said she is overjoyed by the outcome.

"Miracles do happen," she said outside the hospital. "And they're here today."

A photo was posted to a Facebook page tracking the search, showing a smiling Eller with what appeared to be injuries to her face and dirt on her clothing. The photo shows Eller surrounded by Cantellops, Berquist and Helmers.

"This search and rescue was truly a community collaboration of Maui County first responders, family, friends and community volunteers," Victorino said in a statement to The Associated Press. "I extend my deepest appreciation for everyone involved in searching for and locating Amanda. Your work, determination and sacrifice has helped return her to her loving family. God bless them all."