The hate crime charge was dropped Tuesday for the accused New York City Times Square box cutter slashing suspect, who was ordered held without bail and to undergo a psychiatric examination, according to a report.

Anthony Evans, 30, had been arraigned for two separate incidents – a July 22 robbery and a July 26 petty larceny case both out of Queens – a week before allegedly violently attacking an unsuspecting 59-year-old Asian woman wheeling a cart designed to carry groceries in Times Square, according to the Manhattan District Attorney's Office.

At another arraignment hearing Tuesday night in Manhattan Criminal Court, prosecutors charged Evans with assault and attempted assault but dropped the hate crime charge initially filed by police. An assistant district attorney had requested bail be set at $200,000 and told the courtroom that prosecutors were still investigating whether the attack was a hate crime.

The basis for the initial hate crime charge was not clear.

The New York Police Department had sought information on the identity and whereabouts of the suspect — a Black male wearing black jacket and gray sweatpants — seen on surveillance video rushing up behind the woman wheeling a basket designed to carry groceries at approximately 10 a.m. on Sunday near the Crossroads of the World located in the vicinity of 7th Avenue and West 42nd Street. The suspect raises his arm and then slashes it down onto the woman in a broad sweeping motion caught on video. 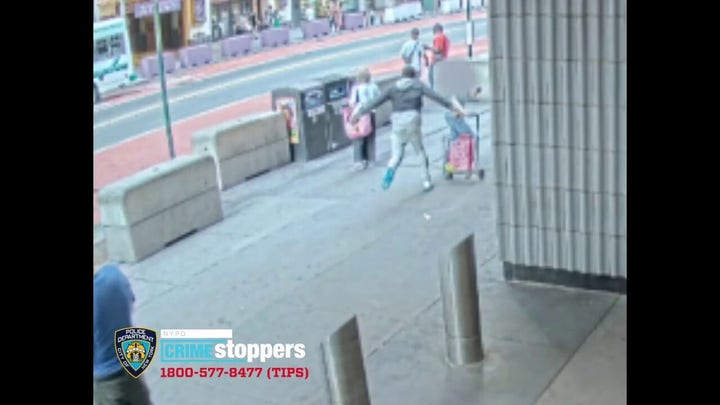 The woman, who works as a seamstress, was slashed in the right hand and was rushed to Bellevue Hospital with a deep bloodied gash that required 19 stitches to close.

Evans, who reportedly had more than 30 prior arrests, was arrested two days later and initially charged with a hate crime and criminal possession of a weapon in connection to the daylight unprovoked attack in the Big Apple tourist hub. Police said Evans lived at a shelter in Washington Heights, N.Y. Daily News reported. His next court appearance is Aug. 25.

In addition to the recent arraignments for robbery and grand larceny days before the Times Square attack, Evans also has misdemeanor convictions, including a third-degree assault, and a youth offender adjudication for robbery in the third degree.

"Because he was at liberty on a violent felony and committed another violent felony, his sentencing exposure is even greater as he now faces mandatory consecutive sentences on each of the C violent felony cases," the Manhattan district attorney's office said in an email to Fox News Digital. "Given the defendant’s history, his commission of multiple crimes over the past two weeks, and the incredibly serious and violent nature of the crimes in this case, significant bail is the least restrictive means to ensure the defendant’s return to court."

At an unrelated press conference Wednesday, New York City Mayor Eric Adams decried the "insanity" aspect of the criminal justice system in the state of New York that allows repeated violent offenders back onto the streets under the controversial bail reform law enacted at that start of 2020.

NYPD is seeking information on a wanted assault suspect after an "unprovoked" box cutter attack near Time's Square. (NYPD)

The NYPD released corresponding data on recidivism rates showing how the number of individuals arrested three or more times in a calendar year for crimes including robbery, burglary, and grand larceny, among others, has increased through the first six months of 2022, compared with crime in the years prior to the onset of the coronavirus pandemic.