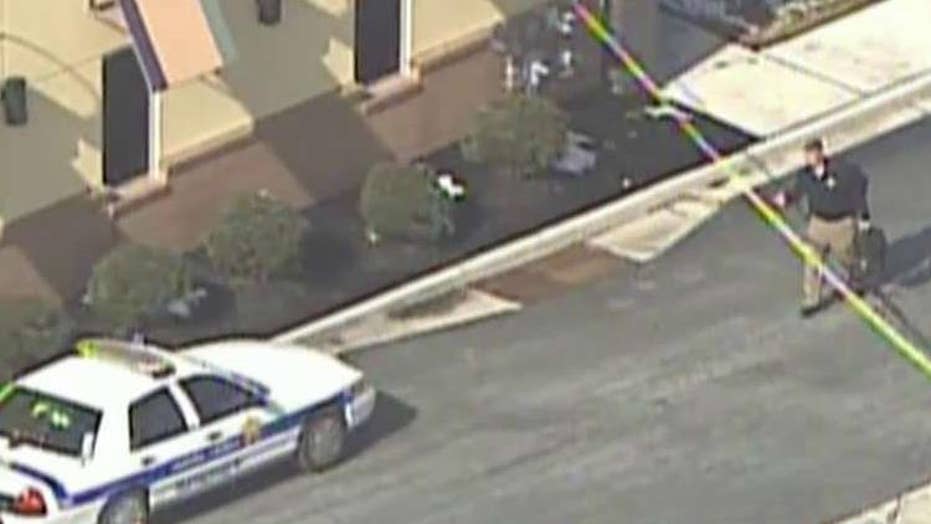 Suspect died in shootout with police

ABINGDON, Md. – The son of a gunman who fatally shot two Maryland sheriff's deputies before he was killed in a shootout says his father was a heavy drinker with emotional problems, but never spoke poorly of police.

Jeremy Evans told WBAL-TV he believes his father, David Brian Evans, 68, thought he'd spend the rest of his life behind bars and decided to get away.

David Evans, who had warrants for his arrest, fatally shot a deputy in a restaurant Wednesday and killed another deputy in shootout before he was killed himself, Harford County Sheriff Jeffrey Gahler said.

Jeremy Evans told the station his mother alerted authorities and left the restaurant before a deputy arrived. He said David Evans shot his mother 20 years ago and she believed he was there to hurt her Wednesday.

Authorities haven't released a motive for the Wednesday shooting, but Sheriff Gahler said he believed the first deputy who approached the Evans was shot because he was wearing a uniform. Evans had warrants out for his arrest in Harford County and Orange County, Florida, where he was accused of assaulting a police officer.

The slain officers were described as a 30-year veteran and a 16-year veteran. The sheriff said he had met with both of their families but was withholding their names because more relatives needed to be notified.

"This is a tragic day for the Harford County Sheriff's Office," Gahler said, his eyes moist with tears. "They were two outstanding deputies who served the citizens of this community faithfully."

Republican Gov. Larry Hogan ordered flags to be flown at half-staff to honor the officers.

The initial shooting took place inside a Panera restaurant in Abingdon, about 20 miles northeast of Baltimore.

Sophia Faulkner, 15, said she and her mother were getting lunch and almost sat right next to the gunman. Instead, they chose a booth about 10 feet away because the man appeared "sketchy" and disheveled.

A sheriff's deputy was called to the restaurant just before noon, presumably because "someone knew who he was," Gahler said.

The deputy tried to talk to the man, who was apparently known to officers and workers at the restaurant. The deputy sat down, asked how he was doing, and the man shot him in the head.

"I saw him fall back out of his chair, and the blood started coming out," Faulkner said. "I didn't know how to process it. My mom said, `What's going on?' and I said, `Get down. Someone just got shot."'

The shooter fled and "everyone started screaming," Faulkner said. Children at the restaurant -- out of school because of snowfall -- were running around.

Her mother, Lynn Faulkner, a registered nurse, said she recognized the man and believed he needed help.

One of the deputies was treated at the University of Maryland R Adams Cowley Shock Trauma Center in Baltimore. Video showed an ambulance and a sheriff's car escorted by police on motorcycles leaving, apparently taking the body to the nearby state medical examiner's office. Police lined each side of the street and saluted when the vehicles drove by.

The shopping center is called the Boulevard at Box Hill. It has a mix of shops, restaurants, a grocery store and a bank.

"Our thoughts and actions now are directed towards the victims and their families. This location will remain closed as we work with law enforcement to investigate," she said.