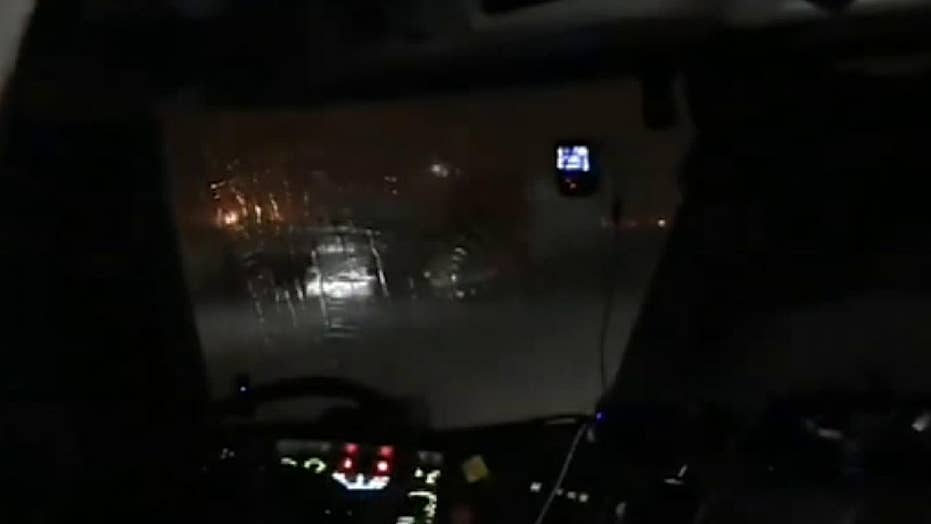 A storm system caused large rocks of hail, predicted to be up to two inches wide, hammer Colorado.

Indeed, a storm there delivered a record-breaking hailstone that measured 4.83 inches in diameter -- roughly the size of a grapefruit, weather services said.

The hail came down in Bethune on Tuesday, and it was measured by the Colorado Climate Center and the National Weather Service's office in Goodland, Kan.

"Update: along with [the National Weather Service in Goodland], today we measured the hailstone that fell NW of Bethune, CO on Tuesday, 13 August. The maximum diameter was 4.83 [inches], which exceeds the long-standing state record of 4.5," the Colorado Climate Center tweeted Wednesday.

"Photos show that it was even larger when it fell (and was about 30 [minutes] between when it fell and was put in the freezer)," the center noted. "We will consider all information to establish 'final' values, but it's clear that this will be a new record for Colorado!"

FREAK HAILSTORM IN MEXICO BURIES CARS, SWAMPS STREETS IN UP TO 5 FEET OF ICE

The NWS Goodland office also tweeted about the hailstone on Wednesday, saying it visited the family had the pellet in a freezer.

"The homeowner commented that the hailstone was brought indoors and secured in a freezer approximately 30 minutes after falling due to safety concerns from ongoing severe weather," the NSW said.

Hailstones of this size could "easily kill people and livestock," according to an AccuWeather meteorologist.

"Hail of four inches or greater is relatively uncommon, but usually happens at least a few times each year during the spring and summer months. Big hail like this is a little bigger than a grapefruit. This can easily kill people and livestock," Brett Rossio said.

The Colorado hailstone weighed 8.5 ounces and had a circumference of 12.88 inches.

"The Colorado State climatologist will be working with a committee of members from other agencies to take into account social media pictures and their measurement along with the measurements taken today," the National Weather Service noted. "When a final measurement is given, we will share that information with our users."

While it is not an official measurement -- yet -- the hailstone caused quite a stir on social media.

Hail is composed of balls or chunks of ice.

While Colorado has unofficially broken its hailstone record, the national record is still held by South Dakota, where a hailstone with an eight-inch diameter fell in 2010. That hailstone weighed nearly two pounds, according to the National Weather Service.