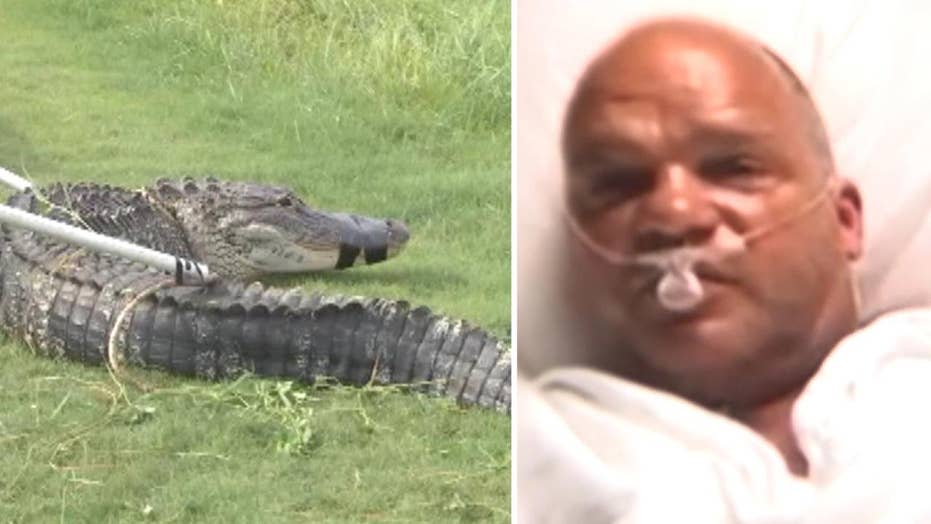 TAMPA – From his hospital bed Saturday, a professional diver described his brush with death when an alligator attacked him in a Charlotte County golf course lake.

Scott Lahodik, 51, is a sub-contractor who has been hired at golf courses throughout the state to recover golf balls from water hazards.

He was working in a lake at the Palms course at the Rotonda Golf and Country Club Friday when an alligator nearly ripped his arm off.

"He just came and, full blast, grabbed my arm all the way back in his throat and then he started to roll with me," Lahodik told FOX 13 during a FaceTime call from his hospital room at Lee Memorial  Hospital in Ft. Myers. "He rolled a couple times and then he still didn't let go so I knew I had to  do something, so I started punching him up by the eye and then he let go."

Lahodik was able to make it out of the lake and, realizing he was now in a race to save his own life,  he jumped in his golf cart and sped back to the clubhouse.

"I was going to lay down on the green, but I knew if I did I didn't think I would make it," he said.

He was rushed to the hospital where he had surgery and is in the recovery process.

"There's probably over 400 staples and stitches and we're just praying no infection sets in over the next couple days," Lahodik said.

Lahodik said he'd made a career diving for golf balls since he retired from the military in 1988.  He's doubts he'll ever be able to do it again.

His wife, Maritza Lahodik, said she'll never forget the call from her husband moments after he escaped the animal's jaws.

"I got a call with him screaming on the other line with a gut-wrenching sound telling me that he had been attacked by an alligator," she said, adding she knows how lucky he is to be alive. "Given the  fact that this gator was the size that it was, where it happened and how it had happened, I have no  qualms about saying that this was a miracle, that I believe that God was protecting him."