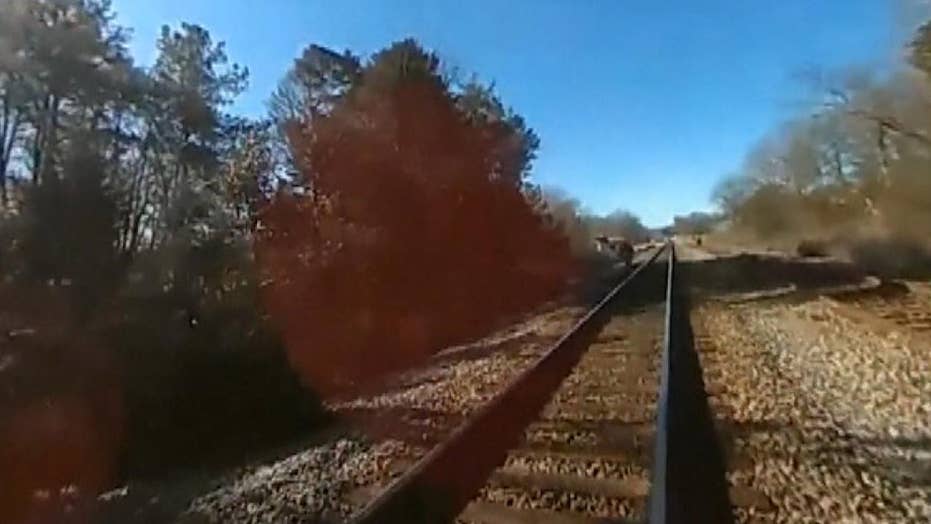 A Georgia officer said he realized he barely got out with his life after seeing body-cam video of a train striking him as he was running after a suspect linked to a burglary.

Polk County Police Officer Andy Anderson was wearing the body cam when the train struck him in Rockmart on Tuesday, according to reports. The collision broke six of his ribs, his elbow and his shoulder. Anderson also suffered a concussion.

"When Andy saw the video, he told me he was lucky to be alive and I told him, yeah, the good Lord was looking out for you that day," Police Chief Kenny Dodd told Fox 5 Atlanta.

Anderson was wearing a new 360-degree body camera that could record more of an officer's location. The department issued the body cams to its patrol officers a few months ago.

The video showed Anderson looking around as the sound of the train's horn grew louder.

Dodd told the station Anderson was so focused on what he was doing that he didn't realize how close he was to tracks.

"That's a prime example of tunnel vision," he told the station. "It's real. He was so focused on the man getting away, he forgot about the danger around him and didn't step far enough off the tracks."

Two days later, Anderson was doing better, even able to give a thumbs up from his hospital bed, Fox 5 reported.

"He's able to talk and communicate and cut up with us a little bit. He's in good spirits," Dodd said.

The suspect Anderson was chasing, 18-year-old Jayden Moats, got away and as of Monday was still being sought.

Rockmart is an hour's drive northwest of Atlanta.