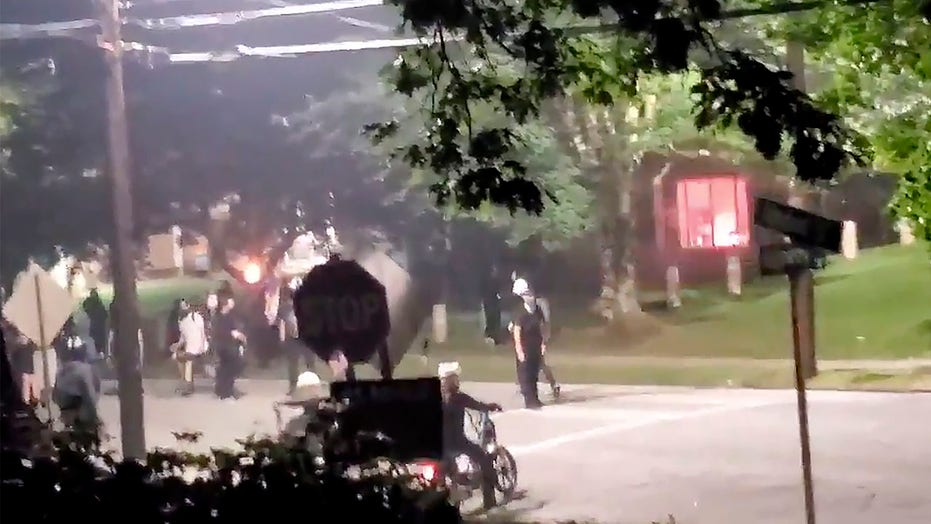 As many as 100 people, many dressed in black and wearing masks, marched outside the building at around 1 a.m., the Georgia State Patrol (GSP) said in an emailed statement. The agency described the group as protesters, who carried rocks, fireworks, and spray paint.

Video footage from the scene shows a group of several dozen people outside the building and the sound of drums beating in the background. Several fireworks are set off. A loud bang is followed by a red flash from inside the building, where smoke can be seen through a glass window.

A few people clad in black can be seen walking up to the window carrying what appears to be fireworks, the video shows. The GSP said fireworks thrown through a window of the building caused a small fire in an office.

Department of Public Safety (DPS) employees put out the fire, and two workers were treated for smoke inhalation, the agency said.

Kimberly Krautter, who recorded the video after the noise woke her up, said the protest appeared peaceful until “three or four bad actors” broke the window and “fire-bombed the office.”

The building, seen right in the background, that houses Georgia State Patrol headquarters is vandalized in Atlanta early Sunday. Video showed protesters appearing to set off at least one firework inside the building. (Kimberly Krautter via AP)

While no injuries were reported, the agency said the group caused “extensive damage” to the building and a DPS vehicle parked outside.

The estimated cost of the damage was not immediately known.

The Georgia Bureau of Investigations is assisting in the investigation. No arrests have been made yet.

While protests in Atlanta and across the nation have taken place over the past month following the deaths of Rayshard Brooks and George Floyd, Krautter said it was unclear what they were protesting.