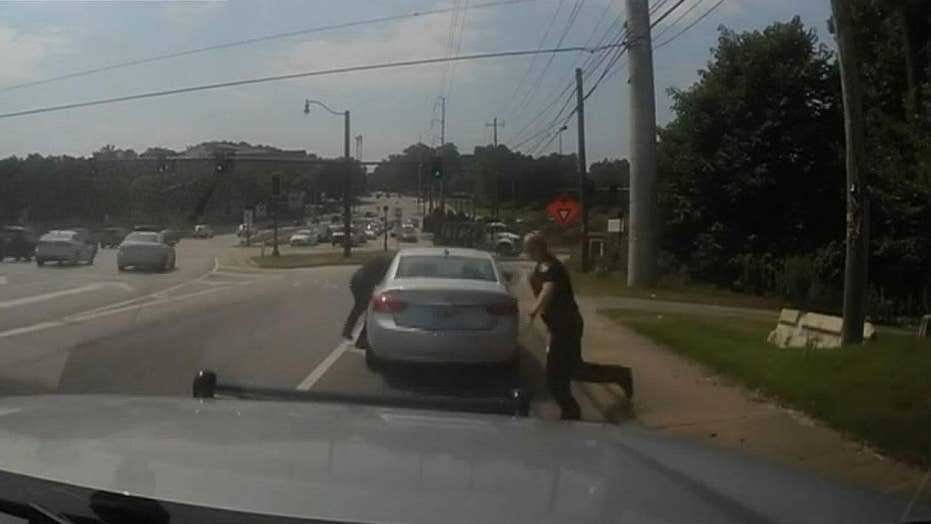 Dramatic dash camera video shows the moment when a Georgia police officer jumped into the driver's side window of a fleeing vehicle following a routine traffic stop on Thursday.

Dunwoody Polie Officer Nathan Daley had pulled over a 2019 Chevrolet Malibu after the driver, identified as 35-year-old Derric Simpson, allegedly violated the state's hands-free law. According to authorities, Simpson put the vehicle in gear, attempting to flee and Daley quickly jumped into the driver's side window.

The 2019 Chevrolet Malibu is seen in the video swerving and eventually smashing into vehicles to shake the officer as he traveled along the entrance ramp to the I-285 freeway. As he was left hanging out of the vehicle, Daley reportedly told Simpson to stop the car multiple times, but he wouldn't stop, according to the Dunwoody Police Department.

Immediately after entering the freeway, Simpson made a sharp left turn, merging into traffic and clipping a white Ford van, which caused Daley to tumble into the middle of the busy road.

Georgia officers eventually caught up with Simpson further down the freeway after the Malibu was involved in another crash just before Roswell Road. He ditched the wrecked vehicle and fled to a forested area near the freeway, and was later taken into custody.

Daley was taken to the hospital where he was treated, released and is expected to make a full recovery. He posted a video message while draped in a hospital gown, calling the injuries just a "little nick nack"

"It does look as bad as it feels, but you know me, I will bounce back 10 times stronger," Daley told the local community. "I love you guys, thank you so much for your support."