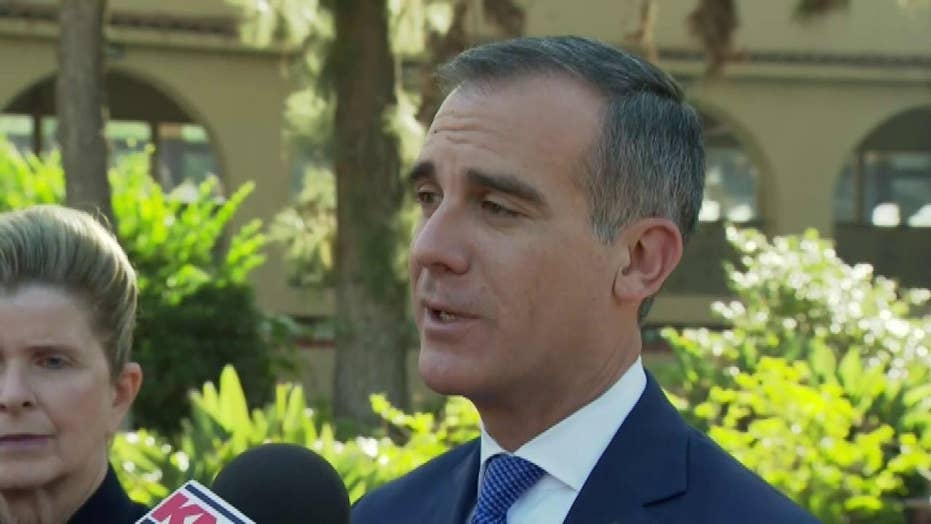 Three suspects have been arrested in the officer's murder.

Police arrested three people on Friday in the murder of Los Angeles Police Department Officer Juan Diaz, 24, who was off duty when he was gunned down on July 27 as he confronted a group of vandals.

The department's SWAT team, the Metropolitan Division and other local law enforcement divisions helped arrest the suspects in Riverside, Murrieta and Temecula, outside the city, Mayor Eric Garcetti said at a press conference.

HUNT ON FOR GUNMAN AFTER OFF-DUTY LAPD OFFICER MURDERED

The three suspects, males in their 20s, have not yet been named.

As the arrests were being carried out, search warrants were being executed across parts of Los Angeles County, including in Glassell Park and Mt. Washington.

"These are the folks we believe are responsible for that senseless murder of Juan Diaz," LAPD Assistant Chief Director Beatrice Girmala said at the press conference.

Police Chief Michael Moore, out of the country, nonetheless tweeted: "Through due diligence and a penchant for justice, we have moved one step closer to bringing justice to fallen LAPD Officer Juan Diaz and his family. We continue to offer prayers and condolences to his family during this unimaginably difficult time."

The Los Angeles Police Protective League, which represents close to 10,000 members of the department, said in a statement: "We are grateful that the cowards and thugs accused of the cold-blooded murder of Officer Juan Diaz are in custody. We appreciate the relentless effort our detectives and officers put into finding these killers.

It added: "We urge ... District Attorney Jackie Lacey to prosecute these cop killers to the fullest extent of the law, including seeking the death penalty. We continue to pray for and support Officer Diaz's family during this time of grief."

Diaz, a two-year veteran of the LAPD, was at a taco stand with his girlfriend and her two brothers when he saw a group of men who appeared to be vandalizing a wall and asked them to stop. Members of the group reportedly approached Diaz, making threats and flashing a gun.

Diaz and his companions got in his pickup truck and drove off, but the men shot at the vehicle, killing Diaz and injuring his girlfriend's brother. Diaz was pronounced dead at the scene.

"My understanding was there was some persons or person spray-painting a wall or something, committing an act of vandalism, and the officer -- I don't know what the conversation was -- walked away." Craig Lally, president of the Los Angeles Police Protective League, told reporters after the killing. "There was no altercation that I know of, and then later, the officer was walking to his car and this person or persons went up and shot him."

A vigil was held Saturday at LAPD headquarters, where mourners left flowers and tokens in memory of the fallen officer.

"Tonight we gathered to honor a man who dedicated himself to our city — A man whose passion was LA," The LAPD tweeted on Saturday. "There were hugs & tears — but we held our heads high as we paid tribute to his dedication to something greater than himself. Tonight our HQ facility is proud to have Juan front & center."

Diaz grew up in Northeast Los Angeles and wanted to be a police officer since childhood, Garcetti told reporters. He performed "exceptionally well" in the police academy and "because of that was picked for some special duty," landing an assignment to the Special Operations Division of the Professional Standards Bureau, or internal affairs.