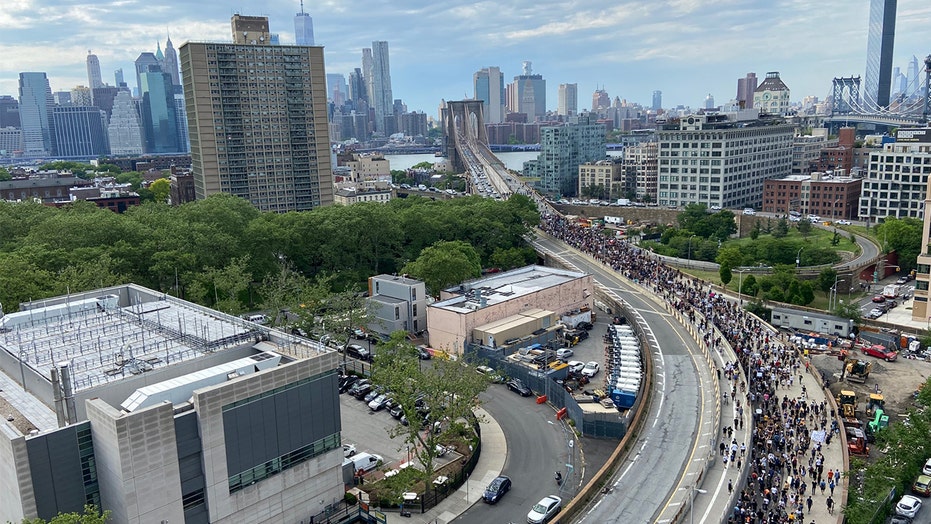 Aerial video showed the size and scope of the demonstration as marchers, some carrying signs and banners, made their way over both the pedestrian space and the three-lane-wide span for vehicle traffic.

The march came after a memorial service at Cadman Plaza for George Floyd, who was killed in police custody in Minneapolis on May 25.

Protesters stream across the on-ramp to the Brooklyn Bridge as some drivers honk their horns in support Thursday. (James Rogers)

At the memorial, Terrence Floyd thanked the crowd for their support and urged protesters to remain peaceful, the New York Post reported.

“I’m proud of the protest, but I’m not proud of the destruction,” the paper quoted him as saying. “My brother wasn’t about that. The Floyds is a God-fearing family.”

After the service, marchers left Cadman Plaza, which is near the Brooklyn side of the iconic bridge, and began moving toward Manhattan. They were reportedly heading toward Foley Square.

One video shows the throng of people marching and chanting, “What do we want? Justice. When do we want it? Now.” Another shows even more people waiting to get onto the crossing, holding signs.

Some photos showed a masked man holding an American flag raised upside-down on a handheld pole.

Elsewhere in the city, thousands of people gathered outside the mayor’s official resident at Gracie Mansion for another demonstration, as seen in videos posted to social media.

Images of that scene show protesters sitting, peacefully but in the middle of the street.

But Mayor Bill de Blasio wasn’t there. He attended the Floyd memorial in Brooklyn, where some in attendance met him with boos and called for him to resign.

Minnesota prosecutors on Wednesday upgraded the charges against Derek Chauvin, one of four Minneapolis police officers fired after Floyd’s death, to second-degree murder. The other three officers involved -- Thomas Lane, J.A. Kueng, and Tou Thao -- were taken into custody Wednesday night and charged with two counts of aiding and abetting and second-degree murder.