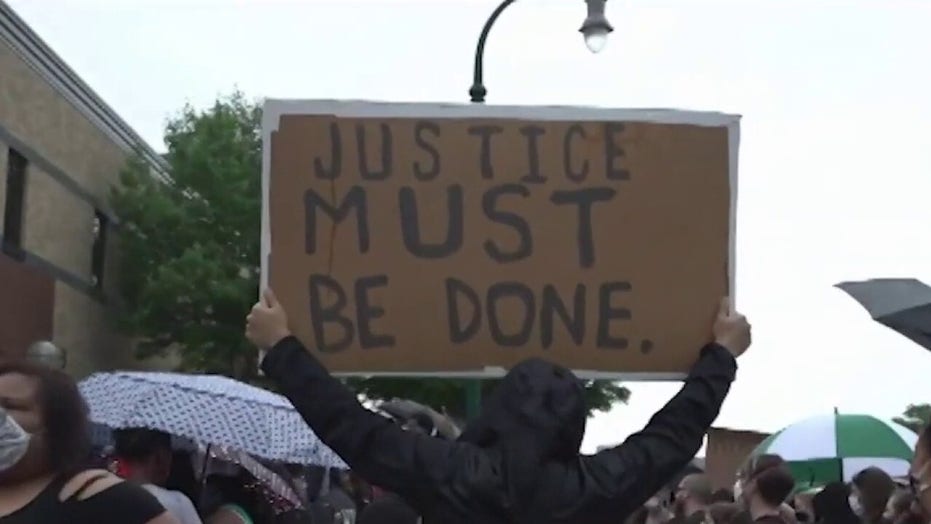 The Minneapolis police chief acknowledged Thursday that his department contributed to a so-called “deficit of hope” that plagued his city well before the death of George Floyd, a black man who died while in police custody on Memorial Day.

Chief Medaria Arradondo said during a news conference that the Minnesota city has experienced a lot of trauma in the wake of Floyd’s death and that he could not allow others to compound that trauma with looting, robbing and torching buildings in the name of the First Amendment.

“I know that there is currently a deficit of hope in this city and I know as I wear this uniform before you, this department has contributed to that deficit of hope, but I will not allow to continue to increase that deficit by re-traumatizing those folks in our community.”

He continued: “I am committed to restoring peace and security in our community.”

Arradondo's remarks came hours after the Justice Department said it was making the federal investigation into Floyd's death a "top priority." It also promised a "robust" probe by the FBI.

Floyd, 46, was pronounced dead Monday night after he was pinned to the ground by Minneapolis police officer Derek Chauvin.

The circumstances surrounding Floyd's death have weighed on the city.

Chauvin, along with three other police officers involved in the incident, Thomas Lane, Tou Thao, and J. Alexander Kueng, were fired from the force Tuesday.

On Wednesday, Minneapolis Mayor Jacob Frey demanded the arrest of Chauvin, the police officer seen on camera kneeling on Floyd's neck as he struggled to breathe.

Frey also called for Hennepin County Attorney Mike Freeman to "act on the evidence before him" and charge the "arresting officer" shown with his knee on Floyd.

"I've wrestled with, more than anything else over the last 36 hours, one fundamental question: Why is the man who killed George Floyd not in jail?" Frey asked during a news conference. "If you had done it, or I had done it, we would be behind bars right now."

A fire was started at an AutoZone shop in Minneapolis during violent demonstrations in the wake of the death of George Floyd, a black man killed while in police custody. (Carlos Gonzalez/Star Tribune via AP)

Minneapolis woke up Thursday morning to fires still burning and smoke hanging in the air after a second night of violent protests turned deadly overnight.

A man was found dead Wednesday night on a sidewalk. Police, who responded to the area of Bloomington and Lake Street at 9:25 p.m., said the initial call was a reported stabbing, but the wound turned out to be from a gunshot.

The man, who has not been identified, was pronounced dead at a local hospital.

The Star Tribune reported local law enforcement officials were still working early Thursday after at least five people were struck by gunfire throughout the night.

In the case of the fatality, the newspaper reported it is believed the man was killed when the owner of a pawn shop opened fire on a man he believed was burglarizing his business.

A fire was started at an AutoZone shop in Minneapolis during violent demonstrations in the wake of the death of George Floyd, a black man killed while in police custody. (Carlos Gonzalez/Star Tribune via AP)

A 59-year-old man is in custody in connection to Wednesday night's fatal shooting, but the details of the case were “still being sorted out,” police spokesman John Elder told reporters.

He said the death is being investigated as a homicide.

JUDGE NAPOLITANO ON GEORGE FLOYD'S DEATH: WHY HAVEN'T THE OFFICERS BEEN ARRESTED?

A protester runs away from where police deployed chemical irritants near the 3rd Precinct building in Minneapolis on May 27, during a protest against the death of George Floyd in Minneapolis police custody earlier in the week. (Christine T. Nguyen/Minnesota Public Radio via AP)

Demonstrations broke out in the early afternoon Wednesday near the city’s 3rd Precinct station, in the southern part of Minneapolis, where Floyd died on Memorial Day after Chauvin knelt on his neck until he became unresponsive.

City Council VP Andrea Jenkins, in the same news conference as Arradondo on Thursday, condemned the violence in the city overnight.

"You have every absolute right to be angry,” she said. “However, you have no right to perpetrate violence and harm on the very communities that you say that you are standing up for.”

She added: “We need peace and calm in our streets and I’m begging you for that calm."

Footage from the ground showed protesters milling in streets, some running in and out of nearby stores. A Target, a Cub Foods, a Dollar Tree, and an auto parts store all showed signs of damage and looting. As darkness fell, a fire erupted in the auto parts store before protesters set other fires in the street.

On Thursday morning, blocks of buildings with broken-out windows and other damage were seen.

Frey tweeted for calm early Thursday. “Please, Minneapolis, we cannot let tragedy beget more tragedy,” he said on Twitter. He also asked for the public's help in keeping the peace.

Arradondo said the protests on Wednesday night had a “different tenor” than previous demonstrations.

It was the second night of violent protests since the death of Floyd, whom police were seeking to arrest outside a Minneapolis grocery store on a report of a counterfeit bill being passed. A bystander’s cellphone video showed an officer kneeling on Floyd’s neck for almost eight minutes as he eventually becomes unresponsive.

EX-NYPD COMMISSIONER KERIK CALLS GEORGE FLOYD DEATH 'ATROCIOUS': 'THIS WAS AN ABUSIVE USE OF FORCE'

Protesters damage properties at the Minneapolis 3rd Police Precinct in Minneapolis on May 27. The mayor of Minneapolis called Wednesday for criminal charges against the white police officer seen on video kneeling against the neck of a handcuffed black man who complained that he could not breathe and died in police custody. (Carlos Gonzalez/Star Tribune via AP)

Frey also asked the governor to deploy the Minnesota National Guard to help with the response to the protests. A spokesperson with the governor’s office told FOX 9 the state has so far deployed 50 to 60 state troopers to assist Minneapolis police.

“Justice historically has never come to fruition through some of the acts we're seeing tonight, whether it's the looting, the damage to property or other things,” he said.

Fox News' Eddie DeMarche and The Associated Press contributed to this report.