A judge on Thursday declined to move the location of the trial for the former Minneapolis police officers charged in connection with the death of George Floyd, and ruled that they will be tried in a single proceeding.

Hennepin County Judge Peter Cahill ruled after defense attorneys had argued that pretrial publicity had made it impossible for the four men to get a fair trial. They had also cited a Sept. 11 hearing in which the men and their attorneys were confronted by angry protesters outside the courthouse, saying it showed that holding the proceeding in the same area where Floyd died would be unsafe for participants.

This combination of file photos provided by the Hennepin County Sheriff's Office in Minnesota on Wednesday, June 3, 2020, shows Derek Chauvin, from left, J. Alexander Kueng, Thomas Lane and Tou Thao. Chauvin is charged with second-degree murder of Floyd, a black man who died after being restrained by him and the other Minneapolis police officers on May 25. Kueng, Lane and Thao have been charged with aiding and abetting Chauvin. (Hennepin County Sheriff's Office via AP)

Defense lawyers had argued that witnesses could be intimidated, and jurors could be affected by chants from a crowd outside. Moving the trial away from Minneapolis to less diverse areas of the state likely would have affected the makeup of the jury.

Cahill said he would revisit the ruling if needed.

Defense attorneys had also argued that the men should face separate trials, as each officer tried to diminish their own role in Floyd’s arrest by pointing fingers at the other. But Cahill rejected that too, saying the complications of separate trials were too great and that trying the officers together would “ensure that the jury understands ... all of the evidence and the complete picture of Floyd's death.”

The decision comes just two days after Election Day, and Floyd’s brother, Terrence Floyd, earlier in the week went out to polling sites in Brooklyn to encourage people to vote. 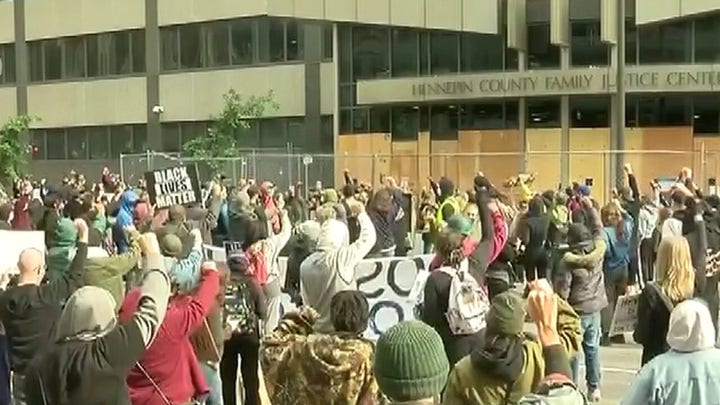 The viral video recorded by a bystander showing George Floyd, a handcuffed Black man, gasping for air while Derek Chauvin, who is White, pressed his knee into his neck for nearly nine minutes before his May 25 death in custody, sparked a national reckoning on racial injustice, igniting widespread demonstrations, civil unrest and calls for police reform.

All four officers were fired. They are scheduled to stand trial in March.

“We applaud Judge Cahill’s decision today to keep the trial of the officers involved in George Floyd’s death in Minneapolis and to try all of the former officers together. Trying these officers together will give the jury a complete picture of what happened on the day that George was murdered,” Ben Crump, the attorney representing Floyd’s family, and his co-counsel, Antonio Romanucci, said in a statement.

“Each of these men played a role that ultimately led to his death- whether it was a knee to the neck or denying any intervention as George and onlookers begged for his life,” the statement said. “The judge's decision to keep the trial in Minneapolis is the right one. We never see Black defendants get a change of venue to increase the fairness of their trials, and the White officers involved in the death of George Floyd should rightly face a jury of their peers in the city where this tragedy took place.”

The names George Floyd, Breonna Taylor, Ahmaud Arbery, and Rayshard Brooks--all killed by police or vigilantes--re-energized the Black Lives Matter movement this year and put race and justice at the center of the election.

The Floyd family has helped the Biden campaign get out the vote. On Sunday, Terrence joined his sister, Bridgett Floyd, and other family members for a rally with Biden’s wife, Jill Biden, in Tallahassee, Fla. Last month, Bridgett appeared in a campaign ad for Biden.