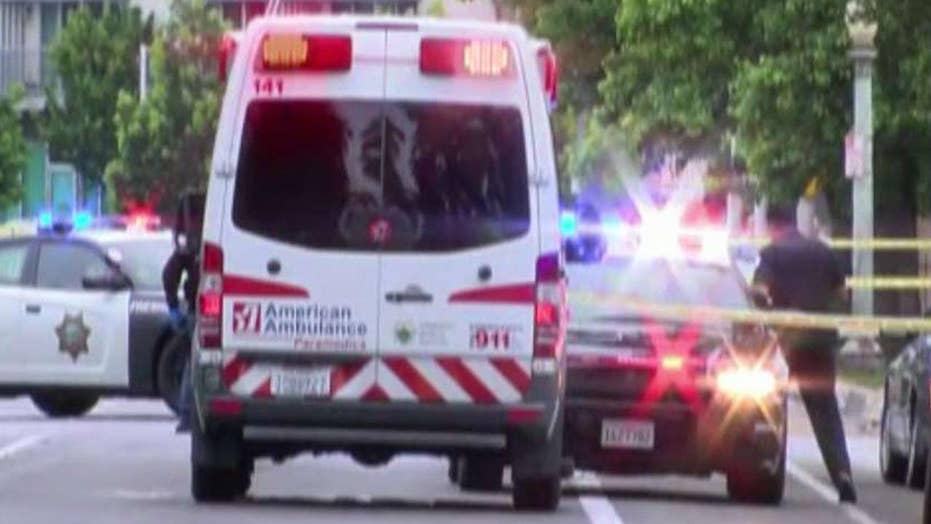 Police said the man who killed three people on a shooting spree in downtown Fresno, Calif., on Tuesday while shouting "Allahu Akbar" wanted to kill as many white people as possible.

Kori Ali Muhammad, 39, knew he was being searched for and he "decided he was going to kill more people," Fresno Police Chief Jerry Dyer said.

During his arrest, Muhammad shouted "Allahu Akbar," but Dyer said the shootings had "nothing to do with terrorism in spite of the statement he made."

"This is solely based on race," Dyer told reporters.

FBI officials told Fox News the agency is not treating the shooting as an incident of terror, but is sending agents to the scene at request of local police.

Fresno Mayor Lee Brand said it was "a sad day for us all" in a statement to FOX 26.

Muhammad first walked up to a utility truck and shot a Pacific Gas & Electric Co. employee sitting in the passenger seat. The driver of the truck, who is Latino, sped off to the police department for help, but the worker, a 34-year-old white man, died.

Muhammad then shot at another person and missed, police said. He aimed at a third, killing the 37-year-old on the sidewalk as he walked with a bag of groceries. The final victim, 58, was gunned down in the parking lot of a charity building, authorities said.

Dyer said Muhammad approached a vehicle in between shootings, but he spared the lives of two Latina women who were in the car with a child.

“These were unprovoked attacks by an individual that was intent on carrying out homicides today. He did that," Dyer said.

Police had put out a news release hours before the shootings Tuesday, saying that Muhammad was armed and dangerous and wanted in the shooting death of a security guard at a Motel 6 last week. The guard, 25-year-old Carl Williams, was white.

Muhammad told officers at his arrest that he was the guy they were looking for, Dyer said.

"I did it. I shot them," Dyer said Muhammad told officers.

Police are searching for the revolver Muhammad said he tossed into a pile of clothing. The gun may have been picked up by someone else, Dyer said.

Muhammad faces four counts of murder and at least two additional charges of assault with a deadly weapon.

Stephen Hughes, 66, said he and his wife rushed home Tuesday after receiving a frantic call from a neighbor. Hughes came home to see a body draped in a blanket on the sidewalk leading to his front door.

He first thought the shooting was gang-related, but then he noticed the bag of groceries near the body. "It looks like a guy carrying his groceries home from the store," Hughes said.

On what appeared to be Muhammad's Facebook page, he repeatedly posted "#LetBlackPeopleGo" and encouraged "black warriors" to "mount up." A flurry of posts emerged in the past day.

He wrote that his "kill rate increases tremendously on the other side" and also posted about "white devils." On several occasions, he wrote updates that included the phrase "Allahu Akbar," meaning "God is great" in Arabic.

Muhammad has a criminal history that includes arrests on weapons, drugs and false imprisonment charges and making terrorist threats. He had been associated with gangs but he was not a confirmed member, police say.

Muhammad was charged in 2005 with possessing cocaine with intent to distribute, court records show. Federal prosecutors said at the time that he was also in possession of a 9mm semi-automatic handgun and two rifles after being convicted of a felony.

He claimed insanity, and his attorney requested a psychiatric examination for his client, saying Muhammad "appeared eccentric with some bizarre beliefs." A psychiatrist who examined Muhammad believed he had psychosis, Muhammad's attorney said in the court filing.

He also "suffered auditory hallucinations and had at least two prior mental health hospitalizations," according to court documents. His attorney said that Muhammad had "paranoia" and thought the justice system and his defense attorney were conspiring against him, court papers said.

The attorney who represented Muhammad in that case did not return a call for comment Tuesday.

Public records list Muhammad as Cory Taylor and other aliases with addresses in Fresno and Sacramento. Fresno's police chief said his former name was Cory McDonald. A woman who identified herself as Taylor's grandmother said Tuesday that the family last saw him on Easter Sunday. She hung up the phone before giving her name.

"I never would have thought he would do anything like this," sad Muhammad's brother, who asked not to be identified by name. "I'm just kind of shocked."

He described his brother as a funny and intelligent man.

Police say two of the victims may have been clients of Catholic Charities, which provides a variety of services for refugees, the homeless and those with disabilities.