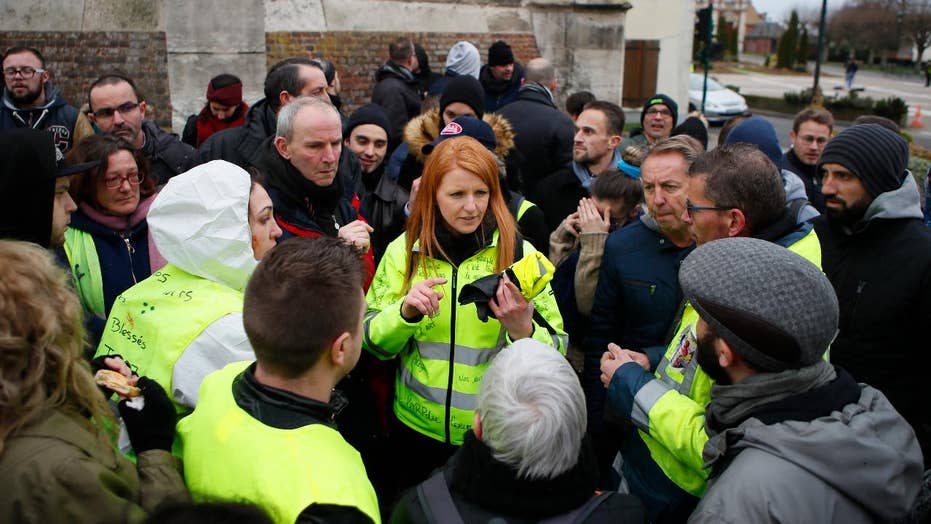 Enraged Yellow Vest protesters clash with police after an outpouring of money to restore the church; Molly Line reports from the scene.

Yellow Vest protestors in Paris battled police during violent clashes Saturday -- newly enraged at the more than billion dollars that have been pledged to rebuild fire-damaged Notre Dame Cathedral, overshadowing their anti-wealth cause.

Black-hooded demonstrators set fire to trash cans, scooters and a car and pelted police with rocks to draw attention anew to their 23rd weekend of protest.

Many protesters are frustrated that the international effort to help Notre Dame has drawn more attention than their five-month-old Yellow Vest movement against wealth inequality, The Associated Press reported.

A man runs by a burning motorbike during a demonstration in Paris, Saturday.  (AP)

Many protesters were deeply saddened by the fire at a national monument. But many are angry at the $1 billion in Notre Dame donations that poured in from tycoons while their own demands remain largely unmet and they struggle to make ends meet.

FRANCE'S YELLOW VESTS: WHO THEY ARE, WHAT THEY WANT, AND WHY

Police walk among burning vehicles during a Yellow Vest demonstration in Paris, Saturday, April 20, 2019. French Yellow Vest protesters are marching anew to remind the government that rebuilding the fire-ravaged Notre Dame Cathedral isn't the only problem the nation needs to solve. (AP)

Authorities deployed 5,000 police around Paris and warned protesters to keep away from Notre Dame and the banks of the Seine.

The Paris police headquarters said authorities detained 126 people by early afternoon and carried out spot checks of more than 11,000 people trying to enter the capital for Saturday's protests. 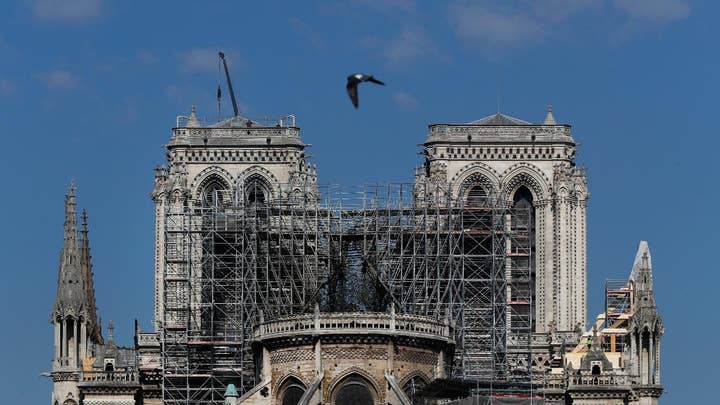 Police fired tear gas amid tensions at a march of several thousand people from France's Finance Ministry toward the Place de la Republique plaza in eastern Paris. Barricades were set ablaze at one spot, and branches set on fire elsewhere. Firefighters quickly responded to extinguish the flames.

A demonstrator throws back a tear gas canister during a Yellow Vest demonstration in Paris, Saturday, April 20, 2019.  (AP)

French President Emmanuel Macron plans to announce a new policy push in response to the “Yellow Vest” protest on next week, Reuters reported.

Macron had intended to announce the new policies Monday but canceled the announcement because of the cathedral fire.