A former Marine who said at a protest that he would “slaughter” Antifa members in self-defense, if attacked, recently had his five weapons confiscated by the FBI, according to reports.

The temporary seizure came through the use of Oregon’s “red flag” law, which allows law enforcement agencies and family members to seek a court order to have weapons taken away from an individual viewed as potentially violent. Such laws are often opposed by supporters of Second Amendment gun rights.

The former Marine, Shane Kohfield, 32, was not charged with any crime, but surrendered five guns, including an AR-15 rifle, according to Phil Lemman, Oregon’s acting deputy state court administrator, the Washington Examiner reported.

The action was reportedly prompted by remarks Kohfield made in public during a demonstration outside the home of Portland, Ore., Mayor Ted Wheeler in August, the Oregonian/OregonLive reported.

“If Antifa gets to the point where they start killing us, I’m going to kill them next," Kohfield told a crowd, according to the Oregonian. “I’d slaughter them, and I have a detailed plan on how I would wipe out Antifa.”

Kohfield previously wrote to U.S. Rep. Dan Crenshaw, R-Texas, a former Navy SEAL, to share his concern about Antifa and voice his support for having the group declared a terrorist organization, a step that President Trump has considered.

Portland has been the site of frequent violent clashes between members of far-left Antifa and supporters of conservative groups such as Proud Boys. The mayor and other city officials have faced criticism for their handling of such events. 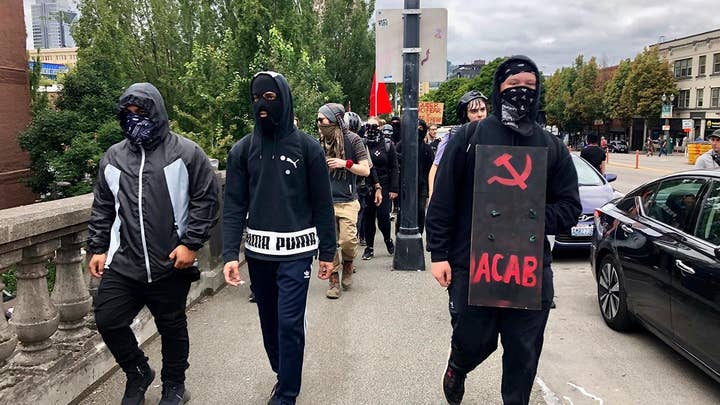 Based on the court order, Kohfield – who served two tours of duty in Iraq -- was committed to a veterans hospital for 20 days and was barred from participating in subsequent protests in Portland.

According to the Oregonian, Kohfield conceded that he probably appeared threatening to other people, but he never intended to cause harm.

“I looked unhinged,” he told the newspaper. “I looked dangerous and have the training to be dangerous.”

The FBI would not comment about the case, the Oregonian reported. It was unclear when Kohfield’s weapons would be returned to him.

The Oregon Legislature narrowly passed the state’s red-flag law in 2017, with no Republican support in the House and backing from only one Republican in the Senate. Gov. Kate Brown, a Democrat, signed the bill into law on Aug. 15 of that year and the law took effect Jan. 1, 2018.