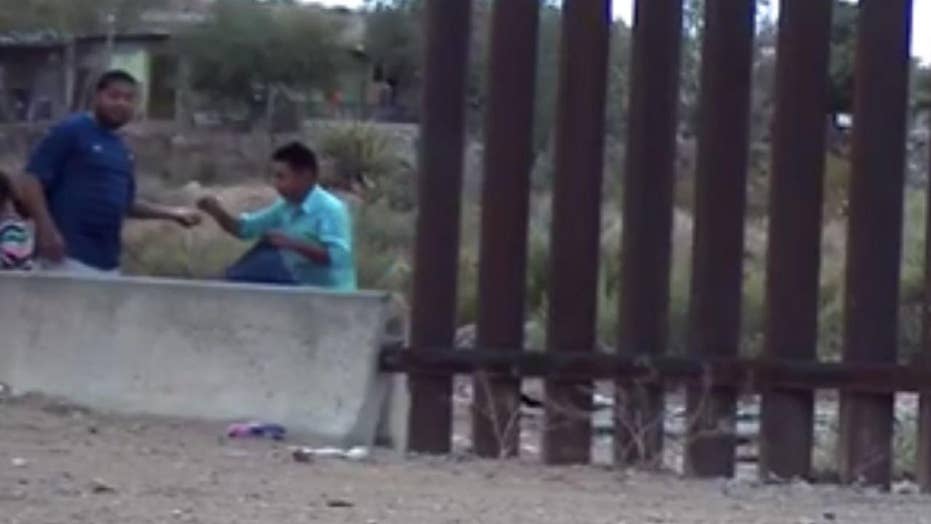 Video footage of the U.S.-Mexico border shows an armed coyote smuggling through dozens with ease.

Footage filmed at a porous section of the U.S. border with Mexico purports to show scores of migrants paying off an armed smuggler – known as a coyote – to come into the U.S., highlighting not only the ease of entry but the flourishing business of the smuggling industry.

“All day, hundreds of people come through this one spot. The smuggler here sometimes takes in big groups, and then smaller groups,” Brian Kolfage, the wounded Air Force veteran who raised more than $20 million to build a privately-funded barrier in the controversial “We Build the Wall” GoFundMe campaign late last year told Fox News on Wednesday. “The smuggler will sometimes run through a group of women and children, and knows how many agents are on the ground and knows that the border agents will get overwhelmed trying to process the asylum cases. He uses that so then others can be brought through, often running as they don’t want to be caught.”

The clips, filmed in Sunland Park just outside of El Paso, Texas and dated between June 6 and 10 this year, seemingly feature dozens of migrants easily stepping over a concrete barrier and in many cases running onto U.S. soil. The apparent coyote, who at times appears armed with a gun at the waist – visible when his shirt is untucked – accepts what Kolfage says is cash from some migrants before leading them into U.S. territory.

Kolfage’s team has a videographer set up 24/7 on a rotational basis at the border, along with security, he said. He also noted that the existing wall where the migrants are pouring through at the spot of filming was built by the U.S. government more than a decade ago. He said that since it was not constructed up the mountain, it is now being “abused and used” by cartels.

“The private industry would never allow such a horrible waste of resources,” he continued. “What is the point of building a billion-dollar wall is you don’t seal it off? The government built a strip of land to go up the mountain, but they didn’t seal it off.”

Smuggling remains a mass moneymaker, and even more so now with immigration numbers having reached historic highs throughout the month of May. According to U.S. Customs and Border Patrol data, more than 133,000 apprehensions took place in just a single month. Subsequently, Border Patrol processing facilities are “dangerously overcrowded,” the internal watchdog for the U.S. Department of Homeland Security (DHS) has warned.

Research shows individuals typically pay between $4,000 and up to $15,000 to be illicitly maneuvered into U.S. territory, usually paid in cash and at the end of a routinely harsh and dangerous journey.

“The cartels are in the business to make money and control all aspects of the border smuggling activities. They run multi-billion dollar enterprises and are taking complete advantage of the wide open border to smuggle,” said Derek Maltz, former Agent-in-Charge of the Drug Enforcement Administration (DEA) Special Operations Division. “They are not only charging huge money for the migrants to cross their controlled territory, but they are using the migrants as a diversionary technique to smuggle their lethal products into America.”

Moreover, Maltz said that cartels are believed to generate at least half a billion dollars a year from the smuggling enterprise. And given that many of the migrants crossing illegally are women and children, many are vulnerable to atrocities and exploitation on their perilous expedition north.

Yet a splutter came earlier this week after officials from the International Boundary and Water Commission (IBWC), which handles water issues between the U.S. and Mexico, ordered the privately financed section to keep its gate open “indefinitely." The officials claimed that the orchestrators had not obtained necessary permits and that the barrier hindered access to a public monument and waterways.

Brian Kolfage on a visit to the Arizona-Mexico border earlier this year.  (Supplied Brian Kolfage)

However, Kolfage claims they “were never in the wrong,” and since Tuesday night, the gate has been put back into their control and they are moving forward.

“We are working to build more of the border wall, we are actively working with the U.S government to finish that wall up the mountain as it was supposed to,” he said, referring to the area where the footage was taken. “We are also working with local landowners to close up some small gaps.”

Despite the controversy brought about in the wake of the wall’s begining over Memorial Day weekend, Kolfage underscored that they have since then raised around an additional $3 million to continue development.

Meanwhile, Mexican authorities – eager to demonstrate to the Trump administration that they are cracking down on U.S-bound migration from Central America on the heels of a trade dispute – underscored Tuesday that their operation has begun.

At least 6,000 Mexican National Guard troops are expected to soon be deployed to monitor migrant routes, and an uptick in deportations is also said to be on the way.