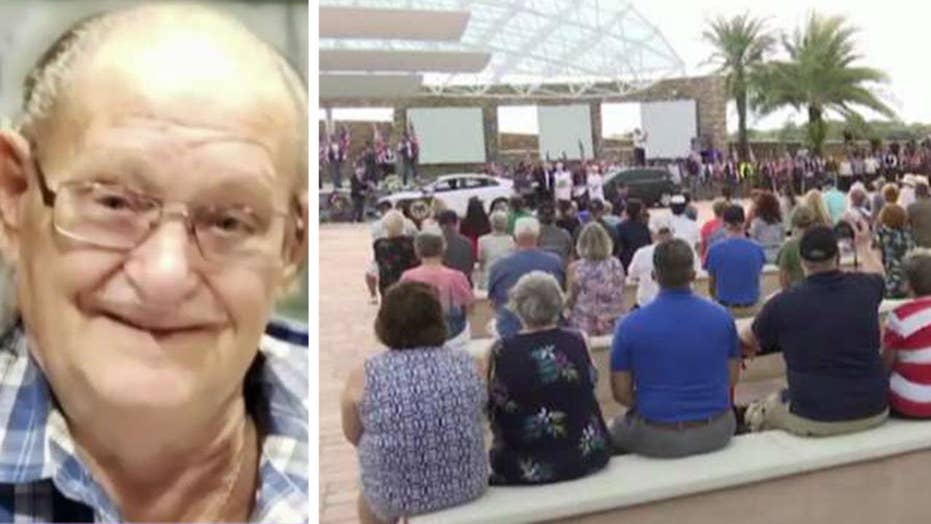 More than 1,000 strangers turn up at the funeral of Florida veteran with no family

Funeral Director Michael Hoyt says it was very humbling to see all of the community members who came out to honor Edward Pearson.

When the call went out for a Florida veteran's funeral on Oct. 1, the brief obituary noted Edward Pearson had "no immediate family" and invited anyone in the area to attend so Pearson wouldn't be buried alone. The notice went viral and thousands showed up to pay their respects.

Not among the scores of mourners? The man's two – living – sons, who say their dad walked out on them as teenagers.

Now there are questions surrounding Legacy Options Funeral and Cremation Services in Naples, and whether that business misled the thousands who turned up for Pearson's service or, as the funeral home contends, it was informed of the familial connection too late to notify the public.

Pearson, who served in the Army from 1962 to 1964 and was discharged honorably, died at age 80 in Naples, Fla., in late August. Seemingly alone at the time of his death, Legacy Options penned his obituary, including the line that Pearson had “no immediate family” and the invitation to the public to attend his burial service, which was being held with military honors at Sarasota National Cemetery.

Several thousand people, most of whom were total strangers to Pearson, ended up attending his funeral from areas throughout the state after the death announcement post went viral.

"With social media, it went right from there," funeral director Michael Hoyt told "Fox & Friends" last Wednesday after the ceremony. "It was very humbling seeing all of the veterans and community members come out to pay tribute to Mr. Pearson. It was for him ... but seeing all of the veterans there, knowing the love and appreciation and honor that they were all being shown yesterday was really overwhelming."

But the day before the ceremony – after the invitation had gone viral –  the funeral home received a call from one of Pearson's two sons, according to the Sarasota Herald-Tribune. Edward Pearson Jr. told the newspaper his father walked out on him and his younger brother, James, when the boys were teens. At some point after Pearson left, the brothers were told he had died. Then they saw the funeral announcement.

“I was kind of surprised he was still alive all this time and I never knew about it,” Pearson Jr. told the Herald-Tribune. “I’m hurt because all these years I could have talked to him and found out why he did what he did to us and why we were lied to.”

The family said they did not know of Pearson's passing or the service until reading about it on social media. They then contacted the funeral home in Naples to inform them they were related.

Hoyt, who told the newspaper he did not speak directly to the family himself, said Pearson's kin did not want it made public they existed but approved of the service.

“Mr. Pearson died alone. Nobody was able to locate any family members and nobody came forward," he told the Sarasota Herald-Tribune in a statement. "We were contacted late Monday by a family member and they approved the interment at the cemetery and we were informed by the family that no one was going to be attending the service. We wanted to be respectful of the family’s estrangement and we wanted to be respectful to them.”

An honor guard carries the remains of during U.S. Army veteran Edward K. Pearson and an American flag during an open funeral service Tuesday, Oct. 1, 2019, at the Sarasota National Cemetary in Sarasota, Fla. (AP Photo/Chris O'Meara)

Hoyt told Fox News in an email the funeral home "made every due diligence effort" to locate family members, but no one had come forward. Hoyt added that when the story went viral, the funeral home was contacted by one of his sons 12 hours before the scheduled service.

Hoyt added that intentions were to "show respect" to Pearson and the veteran community.

Liz Pearson, Edward Pearson Jr.'s wife, said the family found out too late to make arrangements to travel to Sarasota. She told the paper they would have attended if they had known about it sooner.

"He was deserving of a veteran’s memorial and I don’t want to discount that. But this was also an individual, who, for whatever reason, convinced people he had no one," she told the Herald-Tribune. ”At the same time, it is heartwarming to see people honor a veteran they thought had no one. The world needs more of this."