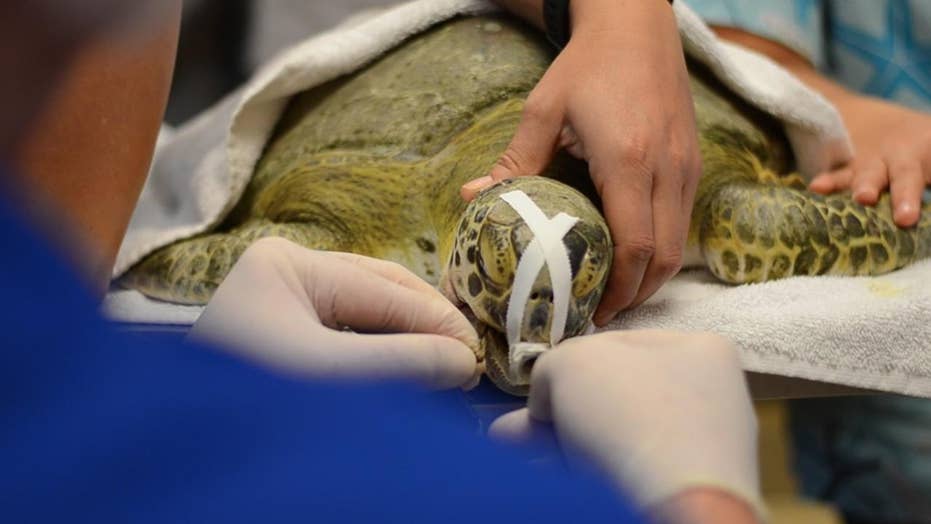 Thousands of animals are killed each year by red tide

JUNO BEACH, Fla. –– Red tide, the toxic algae bloom responsible for killing thousands of fish and other marine life in the Gulf of Mexico each year, is intensifying on Florida’s west coast and the Panhandle. The algae has had a devastating effect in Florida and neighboring coastal states, but now researchers are fighting back with a new medical treatment for sea life that offers hope in the fight against the organism responsible for the problem.

"These drugs have a particular kind of component to them, they're lipophilic, meaning they bind heavily to fats, and brevetoxins produced by red tide do the same thing," said Justin Perrault, director of research at the Loggerhead Marinelife Center.

The algae has had a devastating effect in Florida and neighboring coastal states, but now researchers are fighting back. (Elina Shirazi)

Doctors with the Loggerhead Marinelife Center in Palm Beach are testing the same treatment used to treat cocaine overdoses in humans. The procedure involves injecting special fats into the bloodstream to flush out toxins. The first round of therapy is being conducted on sea turtles.

"We stick a needle directly into the jugular vein in the neck, and then there's this machine that kind of pumps the intravenous lipid emulsion very slowly into the bloodstream and that's how it's delivered and it doesn't take very long," Perrault explained.

"The toxin causes neurological symptoms. It causes muscle tremors, head shaking, even seizures with them. In most cases, within two hours of giving them the treatment those symptoms are gone," Dr. Charles Manire, a veterinarian with the center said.

According to the Florida Fish and Wildlife Commission, the red tide organism -- known as "karenia brevis" -- has been found in Florida’s Sarasota, Charlotte, Lee and Collier counties.

Red tide is also a problem for countries like Australia, China, New Zealand, India, and Vietnam.

In October, 58 turtles were reported dead in Collier County, while two others were reported sick or injured, according to the county's parks and recreation division. Scientists with the Marinelife Center say the solution is a huge improvement from the normal two-to-three-month recovery time for sick turtles. He believes other centers will come knocking on their door for the cure when they expand it to the public in about a year.

"The human medicine is really, that's kind of a really unique tie in that we are using what we know in humans to also help marine organisms, including sea turtles. There is no saying that this could not be a worldwide treatment for places that experience these blooms," Perrault said.

In addition to the United States, red tide also poses a problem for countries like Australia, China, New Zealand, India, and Vietnam. In Florida, Manire says his team are focusing on the problem where the red tide has hit the hardest.

"The success rate so far has been quite high," Manire said. "Most of the cases are on the west coast [of Florida]. So we're working with the west coast hospitals that experience the most red tide."

Researchers say the breakthrough procedure has already cured almost 30 turtles and could help dozens of species affected by red tide in the Gulf of Mexico.

"The survival rate prior to this treatment with the birds was about 25 percent. It's now in the 80s. So, you know, exponentially more numbers of animals that are able to be recovered as a result of this," Perrault said.

Manire said he was optimistic about the treatment’s potential. "This, my whole life, is about making sick animals healthy, and this will definitely save lives of the animals."