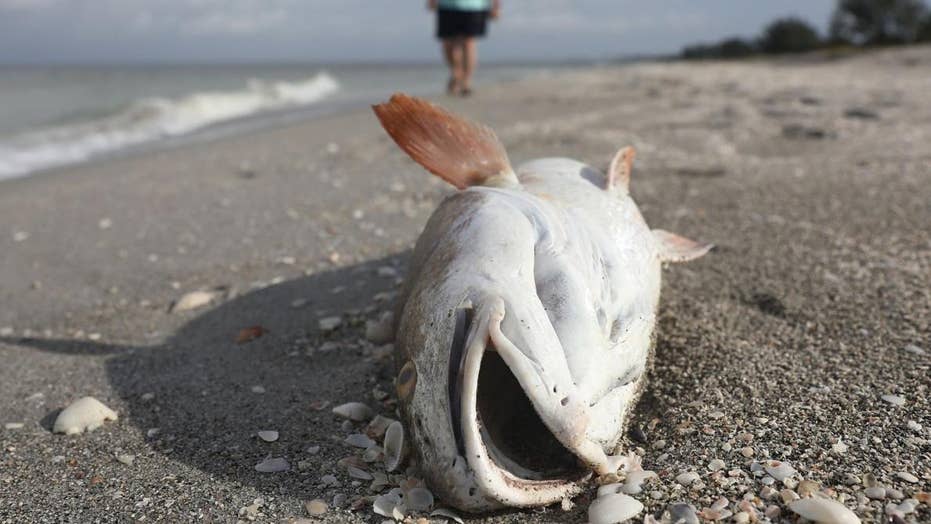 A prolonged case of red tide algae along the Florida coast is killing off animal as small as tiny fish to possible even whale sharks. Here’s a look at the devastation.

Florida’s red tide, which was declared an emergency by Gov. Rick Scott on Monday, has been devastating marine life on Florida’s Gulf Coast this summer. Beaches have been littered with dead sea life as a result of the naturally occurring toxic algae.

“A red tide, or harmful algal bloom, is a higher-than-normal concentration of a microscopic alga (plantlike organism),” explains the Florida Fish and Wildlife Conservation Commission, in a statement. “In Florida and the Gulf of Mexico, the species that causes most red tides is Karenia brevis, often abbreviated as K. brevis. To distinguish K. brevis blooms from red tides caused by other species of algae, researchers in Florida call the former the ‘Florida red tide’.”

The area is no stranger to red tide events. “Red tides were documented in the southern Gulf of Mexico as far back as the 1700s and along Florida's Gulf coast in the 1840s,” explains the Florida Fish and Wildlife Conservation Commission. “Fish kills near Tampa Bay were even mentioned in the records of Spanish explorers.”

This summer’s red tide has already caused the deaths of hundreds of sea turtles, as well as large fish like goliath grouper and even manatees. In places like Longboat Key, more than 5 tons of dead fish have been removed from beaches.

This week, nine dead dolphins were found in Sarasota County. Marine biologists are investigating whether the deaths are related to red tide.

Red tides can also cause respiratory irritation for humans. “For people with severe or chronic respiratory conditions, such as emphysema or asthma, red tide can cause serious illness,” officials explain.

The toxic algae bloom can last as little as a few weeks or longer than a year, according to the Florida Fish and Wildlife Conservation Commission, which notes that red tides can even subside and then reoccur. “The duration of a bloom in nearshore Florida waters depends on physical and biological conditions that influence its growth and persistence, including sunlight, nutrients and salinity, as well as the speed and direction of wind and water currents,” it says.

The latest red tide has spread throughout the Gulf of Mexico, drifting in the water since it began in October. Stretching about 150 miles, it's affecting communities from Naples in the south to Anna Maria Island in the north; the latest bloom appears to be moving northward.

On Monday, Florida Gov. Scott declared a state of emergency due to impacts of red tide in Collier, Lee, Charlotte, Sarasota, Manatee, Hillsborough and Pinellas counties. “As Southwest Florida and the Tampa Bay area continues to feel the devastating impacts of red tide, we will continue taking an aggressive approach by using all available resources to help our local communities,” he said, in a statement.

The Florida Fish and Wildlife Conservation Commission explains that the red tide can be found in bays and estuaries but not in freshwater systems such as lakes and rivers. “Because K. brevis cannot tolerate low-salinity waters for very long, blooms usually remain in salty coastal waters and do not penetrate upper reaches of estuaries,” it says. “However, other harmful algae, including cyanobacteria (blue-green algae), typically bloom in freshwater lakes and rivers.”

Last month, Gov. Scott declared a separate emergency to combat algal blooms caused by Lake Okeechobee water discharges from the Army Corps of Engineers. The discharges were an attempt to manage high water levels following the state's wettest May on record.