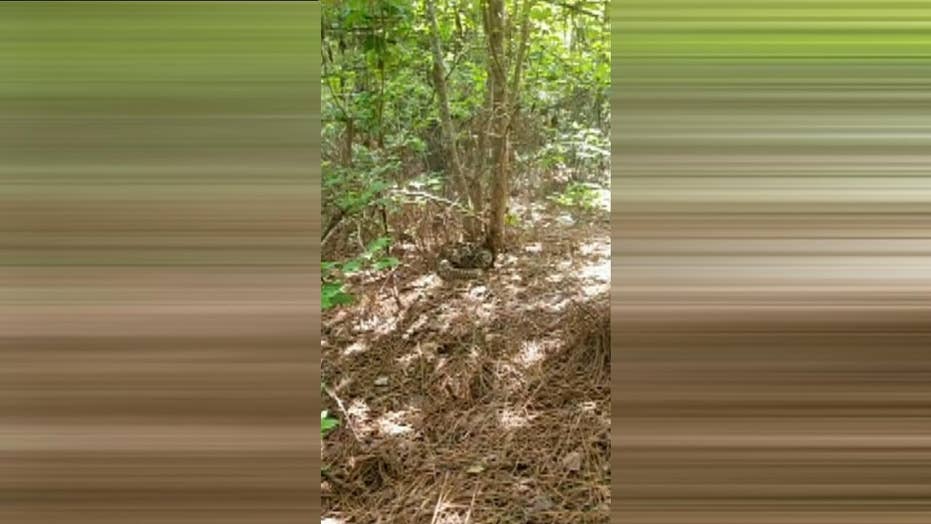 A Florida community was rattled on Monday after spotting a homeless man traveling around downtown Jacksonville Beach with a large venomous snake in his arms.

Several locals reported the unusual — and admittedly frightening — sighting to the Jacksonville Beach Police Department, who then sent several officers to the scene. Upon arrival, the police officers asked the man, who has not been named, to carefully place the reptile in the back of a patrol car as they awaited backup from wildlife officials.

“He says that he found it and God compelled him to keep him safe from traffic,” Jacksonville Beach Police Department Sgt. Larry Smith told WJAX, adding the man appeared to be doing some "show and tell" with the snake around the area.

He apparently told the group of officers he had found the snake on the side of the road earlier that day.

“All of a sudden I just saw police and he was just staring at him yelling ‘put the snake in the car’ and the guy just still had it wrapped around his head," Kaylie Leonard, who witnessed the ordeal, told WJAX.

Eventually, handlers from the Florida Fish and Wildlife Conservation Commission arrived to remove the snake from the vehicle and relocate it to a nearby wooded area. No one was injured in the process.

"Well, meanwhile in Jacksonville Beach this morning.... 6, 7, or 8 feet? I'm not getting the tape measure out," the police department tweeted on Tuesday, estimating the critter's size. "Thank you to the Florida Fish and Wildlife Commission for relocating our guest."

In a WTLV-TV report, a video shows an FWC officer pulling the snake from the patrol car's back seat. The rattles at the end of the snake's tail can be heard shaking as the officer drops the snake into a plastic container.

The snake was reportedly identified as an eastern diamondback — one of six venomous rattlesnakes found in the Sunshine State.

The eastern diamondback is the largest venomous snake in the U.S., reaching up to 8 feet in length as a mature adult. The snake typically keeps quiet and blends into its environment, only making noise or striking if it feels threatened.

"The Eastern Diamondback Rattlesnake is a large, impressive, and potentially dangerous snake. It can strike up to 2/3 its body length; a 6-foot individual may strike 4 feet. These factors, as well as others, make this a snake that should be simply left alone and not bothered," the Florida Museum warns on its website.

The man caught carrying the rattlesnake will not face any charges, according to multiple news outlets.