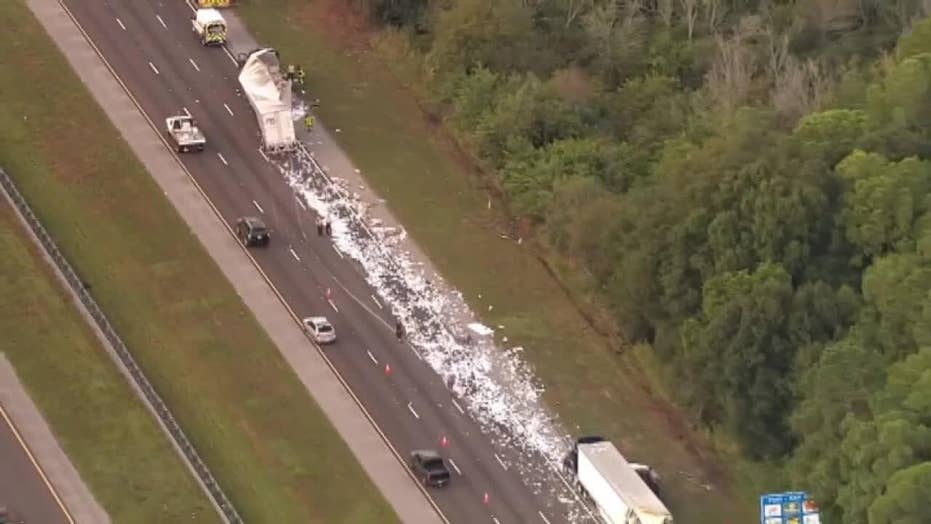 Photos from the scene in Hillsborough County show the mail strewn across the southbound portion of the highway, where Florida Highway Patrol said the accident occurred around 7:15 a.m.

Investigators said a semi-truck, transporting water and produce, was being serviced in the southbound shoulder for two flat tires when the driver of a mail truck, a 58-year-old from Charlotte, N.C., crashed into it.

The mail carrier swerved onto the shoulder and slammed into the stopped tractor-trailer, the highway patrol said in a press release. The driver was hospitalized with serious injuries. The 25-year-old driver of the semi that was hit was not injured, officials said.

The U.S. Postal Service said no first-class mail or parcels was in the truck, but advertisements that were to be sent through the mail.  (Florida Highway Patrol)

The mail truck, according to pictures of the incident, was severely damaged. The roof of the trailer appears to have ripped off, with its right side collapsed. The water and producer-transporting truck's back end also appears seriously damaged.

The mail-carrying truck slammed into a tractor-trailer carrying water and produce that was stopped in the southbound shoulder of I-75 on Monday, police said. (Florida Highway Patrol)

I-75 was backed up in both directions on Monday morning as clean-up crews worked to gather the mail, WTVT reported. It was not immediately clear how much ejected from the tractor-trailer during the crash.

While highway patrol described the truck as a "mail truck," the U.S. Postal Service told the news outlet the truck was transporting advertisements that were to be delivered through the mail service, and that no person mail or packages were on board.