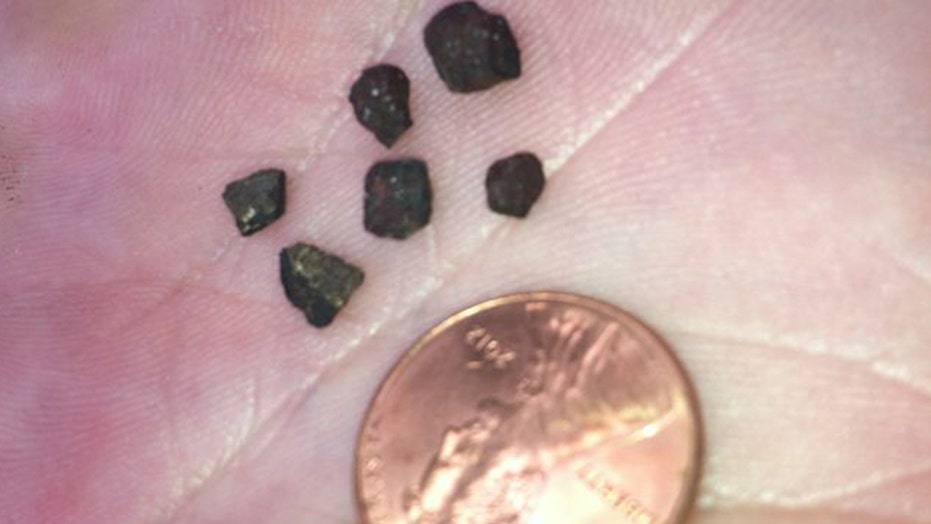 Florida man claims son was struck in head by meteorite

Dad says 7-year-old was hit while playing outside home

Wayne Lippard knows the odds are "astronomical," but he’s convinced his 7-year-old son was struck by a small meteorite while playing in the driveway of the family's Florida home.

Lippard, of Loxahatchee, told FoxNews.com that his son Steven was enjoying his new toolbox in the family’s driveway on Saturday when he was struck in the head by something unusual, causing a small gash that later required three staples to close.

“He’s playing in the driveway and I walk into the house and about four minutes later, he comes to the window screaming,” Lippard said Wednesday. “The gash looked pretty bad, but it wasn’t bleeding a lot so we didn’t panic. He actually wanted to go play again because he was so into his new toolbox.”

Lippard, 43, said he wanted to immediately take his son — who suffers from an autism spectrum disorder — to the hospital for observation, but didn’t want to frighten or startle him. The boy’s grandparents then arrived at the home and were told the incredible story as Lippard searched for any clues online.

“I did some research and tried to figure out what hit him,” he said. “Maybe it was a golf ball or maybe it was debris from the landing gear of a plane.”

The possibility that his son was simply covering up for a self-inflicted wound with his new toys also crossed his mind, Lippard said.

“What if he hit himself with a claw hammer and didn’t want to admit it?” Lippard asked.

Lippard then returned outside to scour the ground near where Steven was hit and noticed a handful of small rocks — each about the size of a pea or smaller — in a 3-foot diameter that didn’t look like any others in his large driveway.

“As soon as I looked at it, I realized it was something different,” he said.

Lippard’s next move was to take the rocks – which he later learned where magnetized, further supporting his claim – to Florida Atlantic University. But scientists at the school were ill-equipped to analyze the rocks and make a determination whether it came from space or not.

"Upon preliminary observation, researchers at the FAU Charles E. Schmidt College of Science were not able to determine if the material brought to the laboratory by Mr. Lippard is a meteorite or not," school officials said in a statement to FoxNews.com. "Laboratory equipment used for the study of meteorites would be necessary to make this determination."

Lippard still has the fragments in his possession and he won’t give them up unless there’s an agreement that they’ll be returned to him once properly analyzed and perhaps verified.

“I don’t want to let go of them,” he said. “This is a meteorite, I know it. I want to make sure they’re truly investigated properly.”

The odds of being struck by a meteorite are reportedly astronomically low. Discovery Magazine reported in 2008 that only one person in modern times had been hit: a woman in Sylacauga, Ala., who was struck by an 8-pound meteorite. In 1992, a woman’s car was crushed in New York. In 1997, another Alabama woman was struck by something that plunged to Earth from space, this time a piece of space junk.

Meteorites, which are pieces of asteroids and other celestial bodies that fall to Earth, are frequently distinguished from terrestrial rocks because they are magnetized due to the presence of iron or nickel. And whatever struck his son, Lippard said, it’s highly magnetic, strengthening the claim in his mind.

Lippard said his son was not traumatized by the experience, but realizes it could’ve been much worse.

“He talks about it all the time, he thinks it’s cool,” he said. “But he could’ve been killed. It hit cement and shattered; it grazed him.”