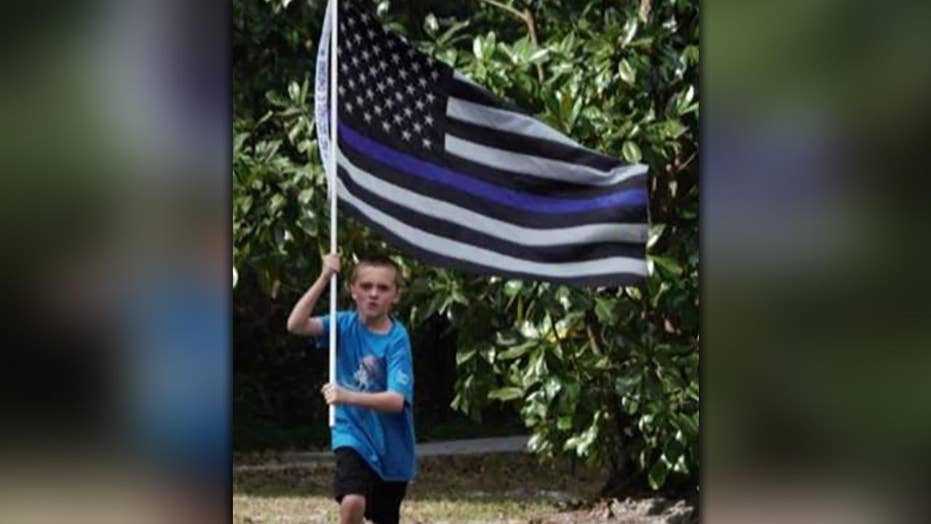 Zechariah Cartledge is running one mile for every law enforcement officer killed in the past year and raising money in the process. Cartledge sits down with 'Fox &amp; Friends' to discuss his work with the Tunnel to Towers Foundation.

A 10-year-old boy from Florida continued his mission to support law enforcement on Sunday by running a mile for a police officer in North Carolina who was killed during a traffic stop.

Mooresville Police Department K9 Officer Jordan Sheldon was shot Saturday night during a "routine" traffic stop. He was transported from the scene, but died of his injuries.

Sheldon's killing inspired Zechariah Cartledge to run a mile for him, saying a quick prayer before taking to track to do seven laps for the fallen officer.

"Tonight I'm going to be running with a Blue Line Flag to honor him," he said in a video posted to his Facebook page, Running for Heroes.

Cartledge told "FOX & friends" in March he dedicates each mile he runs to a fallen police officer, whom he names and shares the story of after saying a quick prayer.

Zechariah got the idea two years ago when he ran the Tunnels to Towers 5K alongside police officers and firefighters who were in full gear, in Orlando.

The 10-year-old has pledged to run at least 150 miles this year, holding the Thin Blue Line flag, to honor the law enforcement officers who died on-duty in 2018.

So far in 2019, 40 officers have died in the line of duty, from causes ranging from being hit by vehicles to suffering medical emergencies, according to data from the Officer Down Memorial Page. The last time the overall number was at 40 -- at this point in the year -- was in 1965.