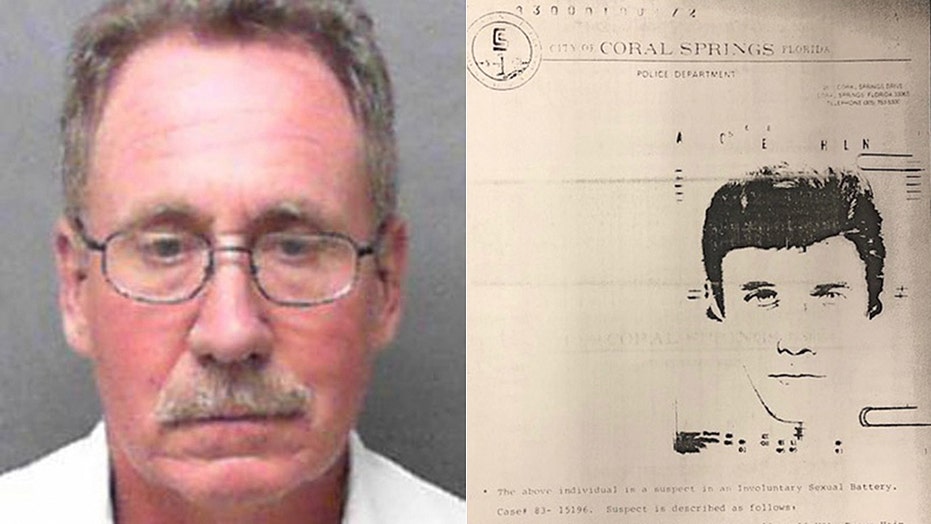 Florida detectives say DNA helped them crack a brutal rape from 36 years ago that was recently reopened after the victim reached out to remind them that her case was still unsolved.

Coral Springs police said Friday that the woman was raped in her bed on Aug. 22, 1983, after being awakened in the middle of the night by an armed stranger who entered her home through a rear door.

"I have loved you for months," the man reportedly told his victim when the rape was over. "You have very nice children and a nice husband." He then put a pillow over her face and left.

Mugshot from 2017 for Timothy Norris, 60. He was charged Friday with raping a woman in Coral Springs, Fla., in 1983. Photo right shows a 1983 flyer of the suspect in that case. (Coral Springs Police)

The woman contacted detectives in March after seeing social media accounts reporting that Coral Springs police had used DNA to arrest a 59-year-old man named Frank Montana for a 1987 rape that was committed by a man wearing a ski mask. Her clothing and other evidence were then reexamined and sent to the Broward County Crime Lab for processing utilizing DNA technology that didn’t exist at the time of the rape, police said.

Detectives found that the 60-year-old Norris’ current residence was a federal prison in West Virginia where he was serving a sentence for armed bank robbery.

Norris has previous arrests for armed burglary, aggravated assault, assault on a female and kidnapping.