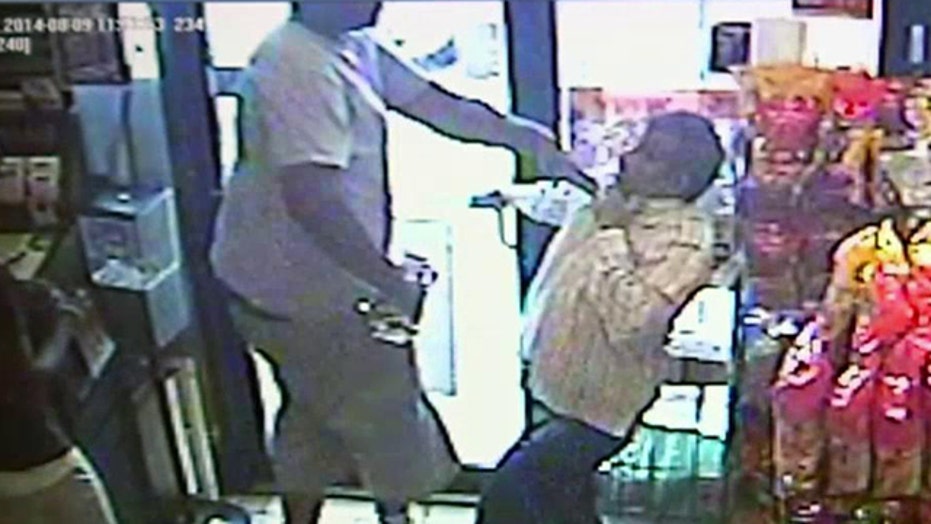 A suburban St. Louis police chief on Friday identified the officer whose fatal shooting of an unarmed black teenager ignited days of heated protests, and released documents alleging the teen was killed after a robbery in which he was suspected of stealing a $48.99 box of cigars.

Ferguson, Mo., Police Chief Thomas Jackson said the robbery took place just before noon on Saturday at a convenience store roughly 10 minutes before a police officer identified as Darren Wilson fired the bullet that killed Michael Brown. Police say that the shot was fired after a struggle touched off by Wilson's confronting Brown. Jackson said Wilson is a six-year veteran with no disciplinary action on his record.

At a press conference Friday afternoon, authorities said the police officer who shot Brown did not know he was a robbery suspect at the time.

The news conference came after nearly a week of sometimes-violent protests and calls by many, including President Obama, for local law enforcement to be more transparent about the circumstances surrounding the shooting. Police previously said they withheld Wilson's identity because of the potential for threats on the officer and his family. The officer has been on administrative leave since the shooting.

Police released still images and were planning to release video from the robbery, at a QuikTrip store in Ferguson. Jackson said Wilson, along with other officers, were called to the area after a 911 call reporting a "strong-arm robbery" at a nearby convenience store. He didn't immediately release details about the alleged robbery, saying more information would be released later.

Police provided few other details about the police officer at the morning news conference and did not take any questions. Jackson said Swisher Sweets cigars were stolen in the robbery.

According to the police reports, Brown and his friend Dorian Johnson were suspected of taking a box of cigars from a store in Ferguson that morning.

"I am incensed," Laura Keys, 50, told The St. Louis Post-Dispatch. "I can't believe this is the tactic they are using, bringing up a robbery to make the victim look like he was the person who created this whole mess."

Police have said Brown was shot after an officer encountered him and another man on the street. They say one of the men pushed the officer into his squad car, then physically assaulted him in the vehicle and struggled with the officer over the officer's weapon. At least one shot was fired inside the car before the struggle spilled onto the street, where Brown was shot multiple times, according to police.

But a much different story has been told by Johnson, who says he was walking down the street with Brown when he was shot. He has said the officer ordered them out of the street, then grabbed his friend's neck and tried to pull him into the car before brandishing his weapon and firing. He says Brown started to run and the officer pursued him, firing multiple times.

The attorney representing Brown's family, Benjamin Crump, said Brown's parents are "incensed" by what he calls "the old game of smoke and mirrors." He says the family was blind-sided by Friday's announcement.

Crump says "it's bad enough they assassinated him, and now they're trying to assassinate his character."

Tensions in Ferguson boiled over after a candlelight vigil Sunday night, as looters smashed and burned businesses in the neighborhood, where police have repeatedly fired tear gas and smoke bombs.

But on Thursday, county police in riot gear and armored tanks gave way to state troopers walking side-by-side with thousands of peaceful protesters. The dramatic shift came after Gov. Jay Nixon assigned oversight of the protests to the state Highway Patrol, stripping that authority from the St. Louis County Police Department.

"All they did was look at us and shoot tear gas," Pedro Smith, who has participated in the nightly protests, said Thursday. "This is totally different. Now we're being treated with respect."

The more tolerant response came as President Obama spoke publicly for the first time about Saturday's fatal shooting -- and the subsequent violence that shocked the nation and threatened to tear apart Ferguson, a town of 21,000 that is nearly 70 percent black and patrolled by a nearly all-white police force.

Nixon's promise to ease the deep racial tensions was swiftly put to the test as demonstrators gathered again Thursday evening. But the latest protests had a light, almost jubilant atmosphere among the racially mixed crowd, more akin to a parade or block party.

The streets were filled with music, free food and even laughter. When darkness fell -- the point at which previous protests have grown tense -- no uniformed officers were in sight outside the burned-out QuikTrip convenience store that had become a flashpoint for standoffs between police and protesters.

Nixon appointed Highway Patrol Capt. Ron Johnson, who is black, to lead the police effort. Johnson, who grew up near Ferguson and commands a region that includes St. Louis County, marched alongside protesters Thursday, joined by other high-ranking brass from the Highway Patrol as well as the county department. The marchers also had a police escort.