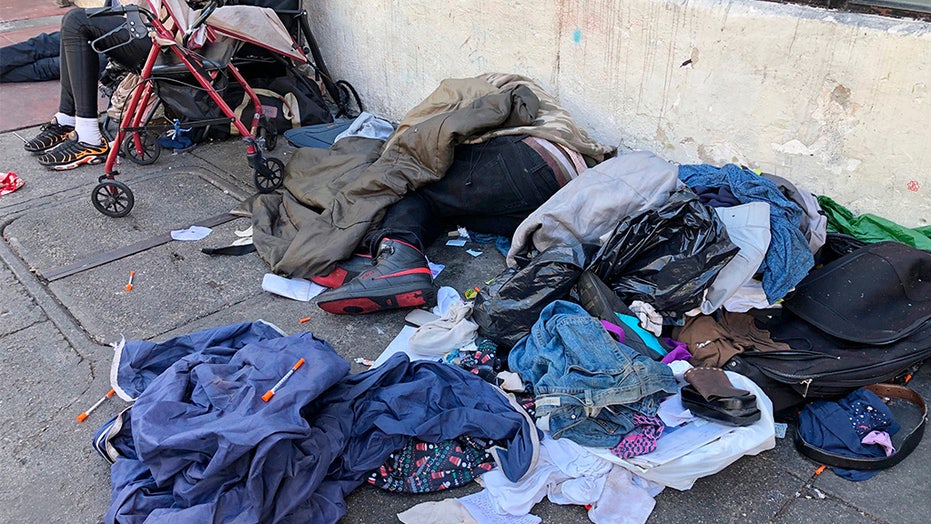 Federal officials said Wednesday that 32 people, many of them Honduran nationals, had been arrested in connection with two international operations that poured heroin and cocaine into San Francisco's notorious Tenderloin District.

Anderson said the arrests were the first step in a crackdown on crimes ranging from drugs to sex trafficking. He added that his office is devoting 15 prosecutors to the effort for at least the next year.

Chris Nielsen, special agent in charge of the Drug Enforcement Administration (DEA) in San Francisco, said an investigation launched in late 2017 uncovered two independent operations stretching from Mexico to Seattle in which defendants living on the eastern side of the San Francisco Bay Area commuted daily to the Tenderloin to sell drugs.

Sleeping people, discarded clothes and used needles are seen on a street in the Tenderloin neighborhood in San Francisco last month (AP)

"Each morning, drugs were dropped off with dealers in the East Bay and then commuted into the city to sell to people from all over the area," he said.

It's not uncommon to see people shooting up or snorting powder in the Tenderloin neighborhood, which contains City Hall and several federal buildings and is just minutes from tourist-heavy Union Square. A city report published in April stated that more than half of nearly 900 people booked into jail or cited for incidents tied to drug sales in 2017-18 were cited or arrested by police in the Tenderloin. It said a high percentage of drug sales involve organized crime and "sellers often give drugs to homeless people who are addicted in exchange" for holding the drugs.

San Francisco Supervisor Matt Haney, whose district includes the Tenderloin, told The Associated Press residents are fed up with dealers using the neighborhood as a dumping ground for drugs. He welcomed the assistance but says the city needs to remain vigilant on immigration. San Francisco was a so-called "sanctuary city" before the rest of California largely pledged not to work with federal authorities on deporting people in the country illegally.

"I hope that this isn't a way to get around San Francisco sanctuary laws," he said. "There can be an important role for the U.S. attorney in going after higher-level individuals, and I hope that is where they would put their focus."

Anderson has vowed that the crackdown would not affect "innocent" homeless people or drug users but would tackle high-level drug dealing, fraud, identity theft and firearms.