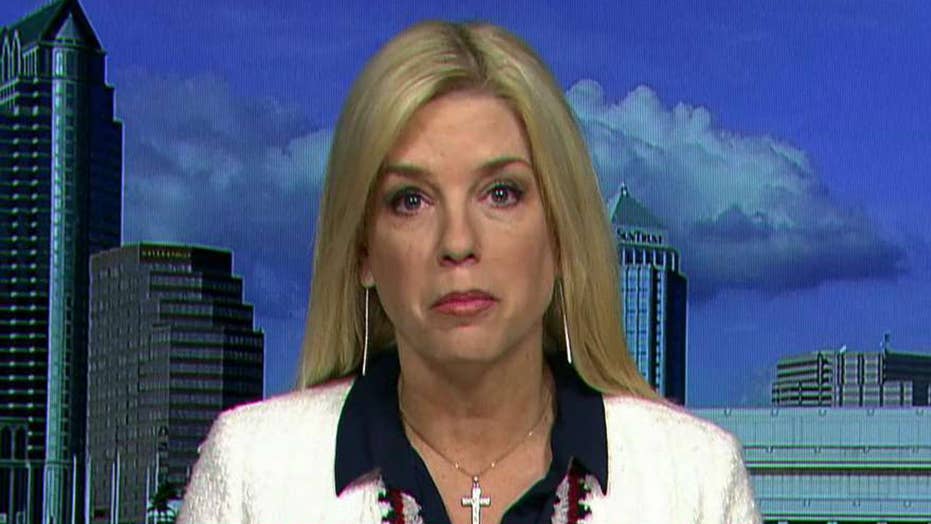 Pam Bondi speaks out on the gunman's motive and her office's victims compensation fund on 'Fox & Friends.'

Heavily armed agents late Sunday entered the upscale Baltimore townhouse that belongs to the father of the gunman who opened fire during a Madden 19 NFL tournament at a restaurant in Jacksonville, Fla., killing two and injuring 11 before killing himself.

David Katz, 24, of Baltimore, was believed to have fired shots during the event at the Chicago Pizza restaurant and bar in The Jacksonville Landing, Sheriff Mike Williams said at a news conference. Williams did not speak about a possible motive.

An FBI spokesman, Dave Fitz, confirmed agents had gone to the upscale townhouse home. But he did not immediately release any other specifics, citing an ongoing investigation.

The agents could be seen inside the home Sunday evening near Baltimore's Inner Harbor. They wore bulletproof vests and carried long guns. Reporters who gathered outside did not see any authorities carrying any bags of evidence outside.

Katz has been described by witnesses and people who knew him as a gamer who erupted in anger after losing the event.

WHY WAS THE MADDEN TOURNAMENT TARGETED BY GUNMAN?

Katz died from a self-inflicted gunshot wound after he shot multiple people, police said. In addition to the dead, 11 other people were injured — nine of them with gunshot wounds.

Katz, whose vehicle was located and impounded by investigators, is believed to have stayed somewhere locally on Saturday night before the shooting.

The Jacksonville Sheriff's Office added that there's "cooperation" in Baltimore with the ATF and FBI as part of the investigation.

An eyewitness to Sunday afternoon's mass shooting told Fox News that the gamer, now identified as Katz, had been eliminated from the tournament before he opened fire.

The witness, who declined to be identified by name but said he was 30 years old, said he did not know the shooter's identity but noted there were "multiple guys who were upset" at being eliminated from the event.

The witness told "America's News HQ" that he had just stepped outside the bar where the event was taking place when the gunshots rang out.

"I saw the door bust open and three or four girls kind of, like, fall over themselves to get out of the establishment. At that point, I didn't know what was going on, but I could tell from the look on their face that they weren't joking around or anything like that."

The witness added that he then heard one of his friends repeatedly shout, "I'm hit! Get help!"

"I didn't know where he was ... but when people started to run, I just literally started to do the same," said the man, who added that some friends had died in the shooting.

The witness added that a friend who was inside the bar when the shooting started told him that "a lot of the guys actually barricaded themselves in a very large bathroom ... there was really no way to escape from where we were playing. You were pinned in there."

One gamer competiting at the tournament, Stephen Javaruski, told the Los Angeles Times the gunman "targeted a few people" before he killed himself.